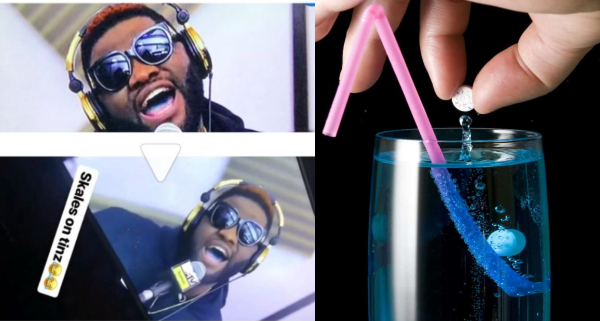 Nigerian singer, Skales who did a short freestyle during his interview on MTV Base, has been accused of abusing illicit date rape drug, Rohypnol a.k.a Rochies before his performance.

Skales’ blue tongue gave him out, and left viewers of the interview wondering if abusing Rohypnol a.k.a Rochies is now the new cool.

Recall that few months ago, veteran actor and TV host, Okey Bakassi, raised concerns over the alarming rate of drug abuse and its consumption in Nigeria. The stand-up comedian said a majority of illicit drugs consumers are Nigerian celebrities. Okey Bakassi made the assertion when he appeared as a guest on Emma Ugolee’s The Gist alongside African China and Sound Sultan.

“Conservatively 70% of Nigerian Celebrities are on some sort of substance today. They have gone ballistic. You hear a lot of names- SK, Kush, Loud, etc. the names come everyday and you’re struggling to keep up with the nomenclature of it.”

Bakassi also admitted that he also indulged in the act when he was younger, and noted that entertainers often take drugs to boost their creativity.

“I did some of it too. Creativity is part of it. [It enhances creativity] in the short term,” he said.

According to a mental health expert who was also on the show, “[Drugs and] alcohol [today] is the to-go guy and yet the most commonly abused substance.”

In a chat with Sunday Scoop, Okey Bakassi added;

“Truly, there is a lot of substance abuse in the industry these days, and just like I said earlier, about 70 per cent of entertainers indulge in this. Even though it may boost creativity in the short-term but in the long run, its effects are not so good. Many people think entertainment is an unserious profession and that’s a big lie.

You need to have your head screwed on tight and know what you’re doing irrespective of whatever is happening around you. Many entertainers are not disciplined and that is why many of them don’t have long, enduring careers. If you study those who have had long careers in the industry, you will realise that they are very disciplined people.”