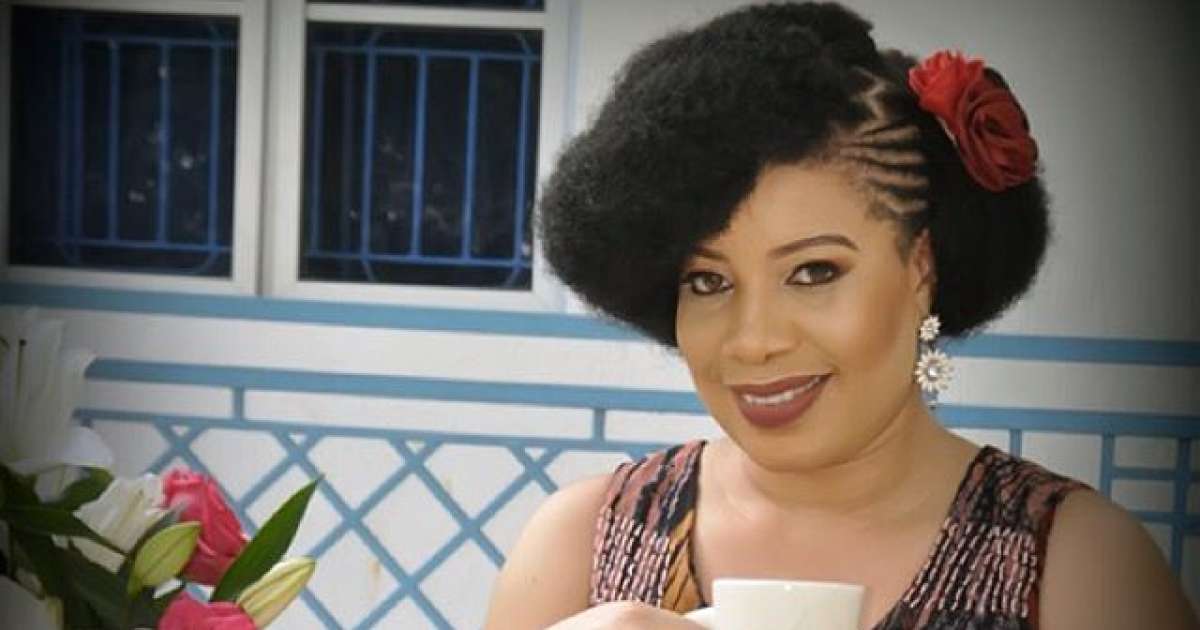 The joy of every parent is to see his or her child walk in his or her footsteps or choose the same career after them, but for Nollywood superstar, Monalisa Chinda, the reverse is the case.

The mother of one revealed that she wouldn’t allow her daughter to nurse a career in acting.

Read more about the actress’ triumphs and travails in this exclusive interview.

Tell us a little about yourself

I am a Nollywood actor, filmmaker, host of ‘You and I with Monalisa’, a 30-minutes talkshow containing a blend of inspiring conversations, human angle stories, lifestyle tips, business and creative entertainment.

And in this 4th season of the show, we seek to create more youth-eccentric content that aligns with the social media. Also, I do little contracts by the side.
What do you like about your character and what movie are you currently working on?

I am currently promoting ‘Family First’, directed by Lancelot Oduwa Imasuen. The film location was Benin City. I played the role of a single (widowed) mum who’s got grown up children in the university.

Having lost my husband to a deadly disease, the character, Itohan, was left to cater for her children alone. Still very desirable and highly admired by other men, Itohan decides to take a shot at dating again, this time to a younger man.

This didn’t go down well with her son who becomes overly protective of his mum. He becomes dangerously aggressive and violent.

Any way, in order not to give the juicy story away, let’s leave it as it is. It’s a compelling contemporary family drama. People should look forward to it when it eventually hits the screens by the grace of God.

What makes one a good actor?

Honestly, if I say to you that Angelina Jolie is a great actor, and you disagree, it doesn’t make my choice a good one and yours wrong. It just means we have different tastes. So, for me, an actor is good if he makes me believe he’s actually going through whatever his character is going through.

I must be convinced ‘he’s jumping out of a bus’, ‘she’s actually giving birth and the doctor is seen delivering her baby’.

The emotion, the physical connection in that character, is called alienation. Again, the character has to be full of surprises; must be unpredictable, must have so many ways to tell a truth or a lie. Actors must not be predictable all the time.

It becomes boring. An actor must have the voice and the body. He must know how to use these tools to move and talk in expressive ways. There are some actors that are painful to watch, I am sorry. I can go on and on, but let’s leave it as it is.

If you were to compare the industry then and now, what has changed?

I would say the industry called Nollywood has evolved, from storytelling, technological special effects and to social media etc. Way back, we struggled with technical, costumes and make up, but we also had fantastic story lines, captivating plots and great acts. We have become better today.

Our movies are being screened at reputable film festivals all over the world. The industry has created also quality TV series, more profitable movies, web platforms, and on line TV. And of course, not to mention our own Africa Magic whose platforms have put us on a global map, creating shows and awards. We have indeed done well for ourselves.

If you were to groom a new actor, which aspect of you would you teach the person?

Series of rehearsals and emotional expressions will play hand in hand to bring out the best acting skills from my students.

Talking about endowment, what part of you is most s*xy?

Every part! I am wonderfully and beautifully crafted by my creator; I appreciate me.

Why do we have old and new Nollywood?

In my opinion, there is no such thing as new and old Nollywood. We are all one. We copy Hollywood right? Is there anything like new Hollywood? Why do we overdo things in Nigeria?

Please, can someone educate me on this because honestly I am clueless? I think we are all in one industry.

Have you turned down a role?

What can make you turn down a role?

Do you have a price to show little to the imagination?

If I understand you correctly, you are asking if I can go naked in a movie. The answer is no.

When you were coming up, were you sexually harassed?

No. It wasn’t one of the criteria for one to become an actor. It may have existed then, but it must have been hushed. I never recalled that ever happening when I started.

Again, I come from a theatre back ground, from University of Port Harcourt. I have a degree in Theatre Arts. So, we were already ‘made’ from school. It was a matter of choice.

Do you want to continue as an actor internationally or you want to migrate into something more profitable?

That was the question. Then, acting wasn’t exactly profitable, but we were happy with the little we were paid. We were always on location, back to back, as opposed to what is happening now. Things are different now. Social media is a good platform for marketing your brand. So, I guess that has answered your question.

Are you intending to produce new movies?

I have produced four already.

How do you produce and act at the same time?

Both work hand in hand. But the former is quite tasking as you are dealing with the whole works of the movie itself. In fact, both are hard work, mentally and physically. Again, it’s your own film, so you must guard it jealously.

No one will do it better than you. But to make it easier, one can hire an associate producer so that you can concentrate and act out your role and work on your characterisation. That, on its own, is another kettle of fish. Preproduction is a must. You must plan ahead.

New actors are now converting from acting to producing, what’s your take on that?

That is welcoming. There is nothing wrong with that. As long as there is employment, there is empowerment.

Are there movies like that? I am completely clueless. I have no idea of what you are talking about.

Can having sex in a movie make you a star?

Why should that make you a star? You are acting in a movie and you are asked to play a sex scene. How it’s played out will determine if the viewers are convinced or not. Meaning the scene must be tastefully done without the real act of making out.

Again, our culture cannot permit that.

What determines your fashion outlook?

It depends on my mood. I like to keep it simple and classy.

What fashion accessory you can’t do without?

What part of you attracts attention when you step out?

My complexion. I want to believe.

How was growing up like? Were you an introvert?

Growing up was fun. We were allowed to grow up in simple healthy environment devoid of technology as opposed to today. Back then we would go to the library to read and do research and home works as opposed to research carried out online, googling almost everything.

Playing in the garden at our backyard then, filled with innocence as opposed to what exists today. It was much fun and I missed that.

If something goes wrong, it goes wrong. It’s how we react and manage the situation that matters. We are not perfect.

What part of you does the public hold as a misconception?

I want to believe it’s my looks. I think I am unapproachable, as I get that a lot. But when people come a little closer; they perhaps have a change of heart. However, their opinion of me doesn’t really define who I am, so it’s okay. You can’t stop people from thinking what they want to think.

What is your favourite meal?

Beans and vegies. Bean cake (moi moi), I don’t think I can go a week without beans… So, yes I love beans.

When you discovered you’re a beautiful woman, did that boost your ego?

Honestly, I wasn’t sure what beautiful meant when I was growing up. Someone must have told you….Perhaps… You know, as you grow older you begin to be more comfortable in your skin; more conscious of whom you truly are.

I sort of knew there is something special about me just as anyone else out there. You must discover who you are at some point.

What is the craziest thing a fan has done to you?

A fan has tried to grab and peck me on my cheek. I was alarmed. I had to tell him to step back and steer clear off me. He later on apologised and pleaded for a selfie, which I later obliged.

After marriage do you still get toasted by men?

No! Nigerian men respect married women. You can take that to the bank. I think if they admire you and don’t know how to convey the message, they keep it to themselves or go to my social media page and make compliments, that isn’t rude or seen as disrespectful.

Would you like your child to go into acting?

With what’s going on now? I would try to talk her out of it. It’s difficult to deal with fame. The society would expect you to act in certain way, talk in certain way, and not seen in certain places!

It’s difficult. However, I am not God. He may have His own purpose for her. After all, we are here to fulfil our purposes on earth.

So, you can’t just walk on the road and buy corn?

No, I can’t. But if I am with my hubby alone in the car, he can pull over and help with that. If I am with someone else, they help too.

How do you safeguard your marriage?

God is the one who safeguards all marriages. However, as human, I try to strike the balance. Nothing comes between me and my home. Nothing. I don’t like to take advantage of things. I am an organic woman. Therefore, my family comes first before my career. I do not know any other way.

What should the fans be expecting from you?

I want to keep giving them the best of me, more movies and providing great content on my talk show.

What is your favourite movie?

That would be my first attempt at producing a movie, Kiss ‘N’ Tell in 2010. That movie remains the best thing that has ever happened to me, in terms of movie making! It sold out on the opening night. That was a blessing.

CATWALQ was another. It was a 26-episode of great content, amazing cast and crew. Even though, that didn’t fetch me money, it’s one of my best series ever. It was a master piece. No regrets!