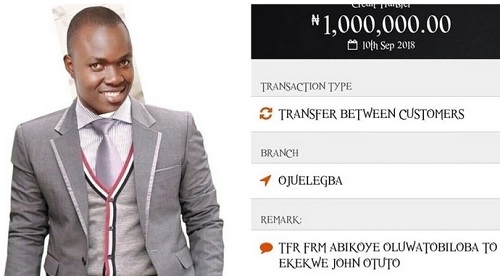 A Facebook user identified as Otuto Ekekwe, has taken to the social media platform to announce the search for a woman who did him a favour, adding that he would like to show his gratitude to her after she returned a sum of one million naira (N1million) back to him.

According to Ekekwe, the lady he identified as Abikoye Oluwatobiloba, had returned a sum of one million naira back to him after he mistakenly transferred it into her account. He revealed that the incident had occured on Saturday, September 8.

It was gathered that the man who couldn’t go to the bank to make complains, had called the bank about the mistake, and he was told to report the incident on Monday, September 11. However, the lady had gone to the bank to get his account number to refund the man’s money back to him.

The young man who asked people to help him find the lady and notify her about his request to meet her, posted screenshots of the transactions and wrote:


“WHO SAID “WE DON’T HAVE GOOD PEOPLE IN NIGERIA??” SATURDAY EVENING 8TH SEPTEMBER, I NEEDED TO SEND MONEY TO #RAGP ACCT TO TOP UP MY EWALLET, I MISTAKENLY SENT THE #1MILLION TO A #STRANGER, #ABIKOYE #OLUWATOBILOBA .#E. WHEN I DISCOVERED MY MISTAKE, I STILL PUSHED ANOTHER #1MILLION TO #RAGP AND I WAS FUNDED.

“I CONTACTED GTB CUSTOMER CARE I WAS TO REPORT TO BANK TODAY MONDAY. THIS PERSON GOT TO THE BANK WHILE I WAS STILL BUSY WITH MY BUSINESS… NOTIFIED THEM, GOT MY ACCT NO, AND SENT BACK MY COMPLETE #1MILLION FROM #OJUELEGBA #BRANCH #LAGOS @9:57AM. THE SAD NEWS IS THAT, I DON’T KNOW THE PERSON, I DON’T HAVE THE PERSON’S CONTACT TO SAY THANK YOU.

“PLEASE IF YOU KNOW THIS PERSON…#ABIKOYE #OLUWATOBILOBA .#E. KINDLY HELP ME GET HIS NO HE DESERVED AN APPRECIATION.” #GOODPEOPLESTILLDEY9JA #ABIKOYEOLUWATOBILOBAEISONE #THANKYOUFROMDECATALYST.”