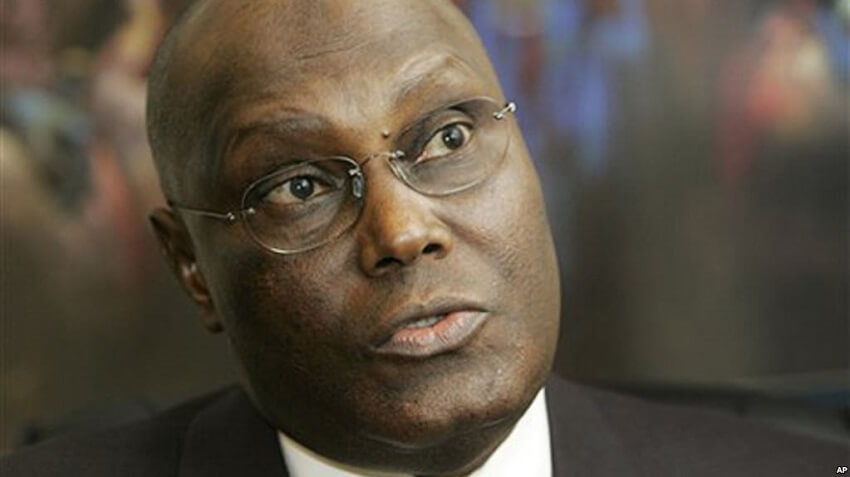 The President’s campaign team said Atiku was only able to win the primary because he bought delegates’ votes.

In a press release signed by its spokesperson, Festus Keyamo, SAN, and made available to DAILY POST on Sunday, the organization congrstulated the former Vice President, and further accused him of massively buying votes.

The statement read, “We wish to congratulate His Excellency, Alhaji Atiku Abubakar on his emergence as the candidate of the PDP in respect of the forth-coming 2019 Presidential Election.

“However, we note with interest all the reports in the media as to massive vote-buying at the PDP primaries (especially with foreign currency). We contrast this with the speech of President Muhammadu Buhari in the 2014 APC Convention when he said as follows:

‘I have always served Nigeria to the best of my ability. I have always tried to give more to the nation than it has given me. This is the principle of service that has guided my public life. Thus, I am not a rich person. I can’t give you a fistful of dollars or naira to purchase your support. Even if I could, I would not do so. The fate of this nation is not up for sale.’

“There were also media reports in the 2014 APC National Convention that Alhaji Atiku Abubakar freely used the same method of massive vote-buying in foreign currency, but he came a distant third. Till date, he has not denied those media reports. The claim therefore that the process that produce him now as a candidate of the PDP was free, fair and transparent is suspect.

“It is therefore clear that going into this election the issues that will agitate the minds of Nigerians most would be centered around the credibility of the candidate of the opposition and the kind of values he brings into our politics.

“Nigerians would ask themselves whether he can be trusted with our national resources with this proclivity for ‘dollarising’ the political arena, thereby taking us back to the warped values from which President Buhari is trying to extricate the nation. One wonders what such a candidate would do with public funds.

“Nigerians would also note with interest the verdict of Atiku’s former boss when he was Vice President on his credibility and integrity, calling him unprintable names at different occasions. Nigerians would note that in all of these occasions, Atiku Abubakar had never defended these allegations against him by his former boss, but continues to court his support and cooperation.

“Nigerians would want to know how candidate Atiku Abubakar intends to inspire a nation to believe in his ability to fight corruption in the face of very damning reports both locally and internationally concerning his records on corruption whilst he was in public service as a Customs Officer and later when he was Vice President of Nigeria.

“We note with amusement that on many occasions Alhaji Atiku Abubakar has tried to claim some credit for certain ‘achievements’ during the tenure of President Obasanjo when he was Vice President because, according to him, he was ‘part of that Government”. We also wish to remind Nigerians that as much as he claims the credit, he must be prepared to accept joint liability for all that happened in that Government. He cannot blow hot and cold. In due time we shall talk about all these.

“Taking all the above into considerations, Nigerians would rightly ask whether a leopard can indeed change its skin despite all the sweet talk they expect to hear from the opposition candidate during the election.

“Finally, in the history of elections in Nigeria, the choices before Nigerians have never been clearer than now: Nigerians would have to decide between a candidate with a history full of credibility crises, damning reports on corruption both home and abroad and another candidate, (the incumbent President) with an unblemished record in public service.”