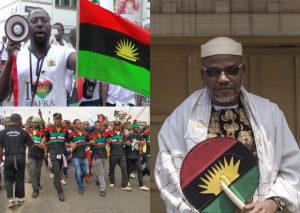 Leader of Independent People of Biafra (IPOB), Nnamdi Kanu, who disappeared over a year ago without trace, has been spotted in Jerusalem. The IPOB leader in a ‘Live’ broadcast shared shared by by Radio Biafra, Kanu is alleged to be in Isreal.

Kanu was declared missing by his community in Abia state, after the alleged “Operation Python Dance II” attack by the military.

The present administration had received heavy backlash from supporters of Biafra, over claims that there was an attack on his people, by the Nigerian army, which led to his disappearance and death of many relatives.

It appears the IPOB leader is alive and well, if the content of this video is anything to go by.