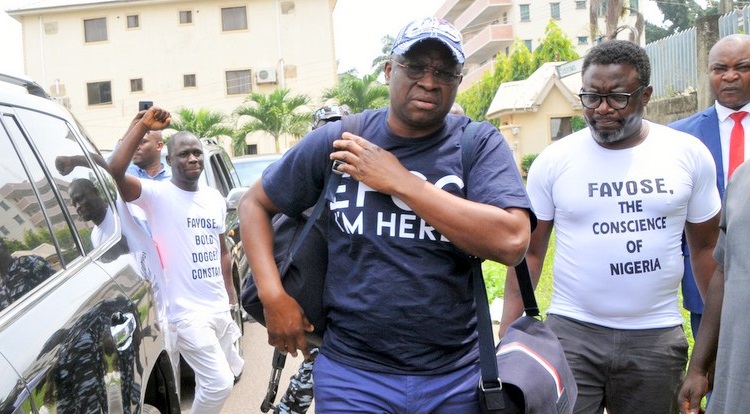 After some drama at the Economic and Financial Crimes Commission (EFCC) headquarters in Abuja, former Ekiti State Governor Ayodele Fayose was taken into custody yesterday.

The anti-graft agency is questioning Fayose over the ongoing probe of the alleged diversion N4.685billion by the Office of the National Security Adviser (ONSA).

The ex-governor is being grilled over the N1.3billion and $5.377million allegedly traced to him from the N4.6 billion slush funds.

The ex-governor arrived at the EFCC office in Wuse 2, Abuja in a customised blue Tee-Shirt with the inscription “EFCC I’m here”.

He was accompanied by his lawyer Mike Ozekhome(SAN), Rivers State Governor Nyesom Wike and a former Minister of Aviation Femi Fani-Kayode . There was also a small crowd of supporters, some of them wearing white T-Shirts emblazoned with “Fayose, conscience of the nation”

Fayose came in a black Lexus SUV. He was carrying a bag containing his dresses.

The crowd was shouting Fayose’s nickname, “Oshoko” and carrying placards in praise of the ex-governor. Fayose said: “I am here in line with my promise that I will be here on the 16th of October and, like I told the EFCC, they should await my arrival. This morning, they have been to my house; they cordoned off the street which I believe was unnecessary and unwarranted.

“I have promised to report; I am here now. I will be able to respond to all allegations.”

As he was going into custody, Fayose told reporters: “Nobody should be afraid of the EFCC, especially when you have nothing to hide. I have remained courageous for Nigerians and I will always be with Nigerians.”

He was quoted as telling detectives that he needed to rest, having worked hard for four years.

He also reportedly told his interrogators: “I deny all the allegations, take me to court.”

Sources said Fayose would respond to issues raised by three teams of investigators.

A source added: “He made a statement where he denied all the allegations and asked the commission to take him to court.

“So far, he has not responded to how he came about N1.3billion and $5.377million from ONSA. He has more issues to clarify; we are going to detain him.”

The source added: “There are three teams handling the allegations against the former governor. There is a special team managing his suspended trial because he had immunity as a governor; a separate team for the N4.685b ONSA fraud and the third panel probes his just completed tenure.

“Definitely, we are going to detain Fayose because he has a lot of issues to clarify.”

Head of Media and Publicity of the EFCC Wilson Uwujaren merely said: “The ex-governor is undergoing interrogation.”

Speaking before Fayose entered the EFCC’s office, Wike said: “You can see that our brother has come to see the EFCC. He wrote a letter to the EFCC that he will submit himself on the 16th of October. He is going in hale and hearty; I believe the EFCC should know.

“So let Nigerians know that he came by himself to the EFCC without anybody harassing him, so that’s why I brought him here.”

Fani-Kayode said: “We came to stand with our friend. He is going in hale and hearty; we trust God he will come out this way.”

Ozekhome said Nigerians were “not in the Hobbesian state which was brutish”. “This is a country governed by law and not the rule of the thumb. There should be respect for the constitution,” the lawyer said.