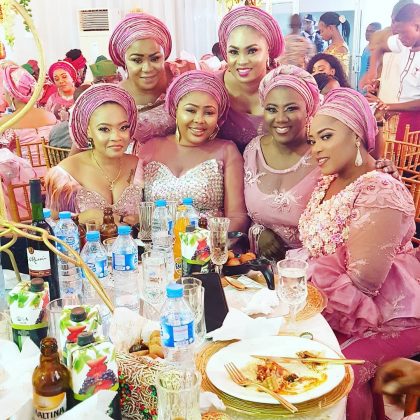 It was all about glamour and glitz when Nollywood actress, Bimbo Oshin hosted celebrities and actresses to sumptuous food and drinks as her niece got married in Lagos.

For Lola Margaret, it was an opportunity to launder her battered image when she attended the wedding party gorgeously dressed in the pink aso ebi.

She was arrested in 2016 for credit card fraud in the United States of America.

Lola, whose mugshot appeared online was initially granted bail on the condition that she revealed the identities of the characters she was working with on the illegal withdrawals, and she did.

Now deported back to Nigeria, she was said to have sought refuge in Ibadan. She remained in seclusion ever since but decided returning to social media penultimate week.

So, her coming to the party was more of a reunion and a retyrn to social sphere as all the actresses present at the shindig welcomed her back to the fold.

All dressed in the pink aso ebi, actresses such as Regina Chukwu, Liz Dasilva; Bukola Adeeyo; Mercy Ebosele; Adediwura Adesegha, Tayo Odueke aka Sikiratu Sindodo and a host of others converged on the Lagos venue to honour Biimbo Oshin.