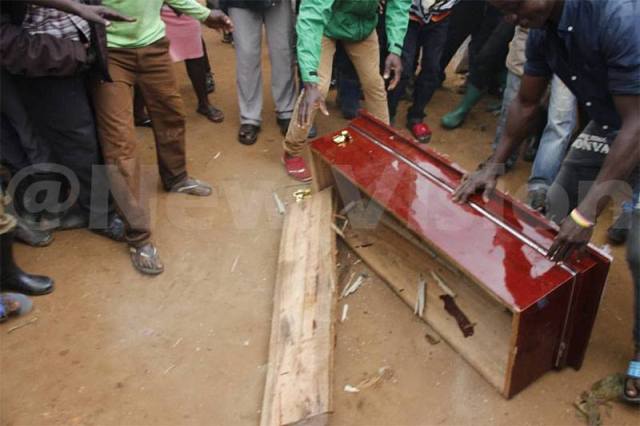 A 30-year-old father, identified as Kafeero aka Ivan K, took residents of Lusaka, Zambia by surprise after he faked his son’s death with a log of wood and then fleeing after he was busted.

The lie was uncovered after residents gathered to mourn his son, Junior which was followed by a vigil – however after the mourners insisted on seeing the boy’s corpse to pay their last respect, they only saw a log of wood in the casket.

Though no one knows why Kafeero will fake his son’s death, however the police has long arrested the funeral service team for questioning as it was gathered that the boy’s father escaped in his car and is still at large.

A John Bosco Mulyowa on Facebook who shared the story, wrote,

Drama ensued at Lusaaka, Kalisiizo Kyotera District after a one Kafeero, 30, Commonly known as Ivan K, announced the death of his ‘son’ Junior.

As is the norm, residents gathered at the home of Kafeero to mourn the passing of his ‘son,’ which was followed by a vigil. However, all hell broke loose in the night when mourners demanded to view the body of the deceased, and pay their last respect.

Police then engaged in running battles with the mourners when they attempted mob justice on Kafeero after they were tipped off that the whole funeral was a hoax.

The mourners overpowered the funeral managers and on opening the coffin, they only found a log.

In the melee that ensued, Kafeero managed to escape in his car and is still at large. Police that had deployed at the scene later arrested the funeral service team for further questioning