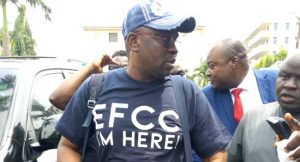 Former Ekiti state governor, Ayodele Fayose has arrived at the office of the Economic and Financial Crimes Commission (EFCC) as promised.

The former governor, a few weeks ago had said he would avail himself at the office of the commission, as soon as he leaves office.

Today, Fayose who ended his tenure as Ekiti state governor, as made good his promise, as he arrived at the commission’s office on Tuesday.

In a tweet on Tuesday before his arrival, the former governor wrote:

In few minutes, I will be at the EFCC Old Office, Wuse 2, Abuja.
I'm a man who stands by his words and I hope that after today, those President Buhari's men that have been accused of corruption will also be bold enough to submit themselves to the @officialEFCC.