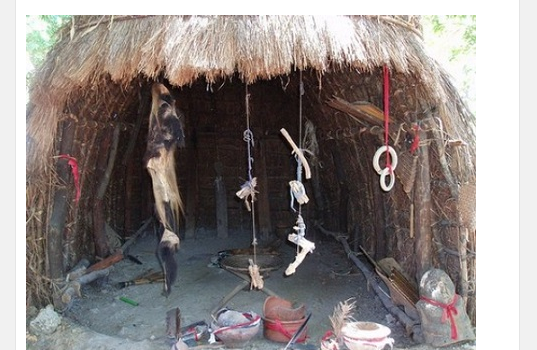 A twitter user, @iam_zamahni has taken to the platform to explain how his neighbor’s daughter was almost used for rituals. According to the user, nothing was going to stop them, but the herbalist was shocked to discover the girl was a ‘living corpse’. Meaning she has been used before and she’s empty! Read the shocking tale…

My Neigbours daughter that was kidnapped on the 28th of Sept just returned home this morning crying. She was kidnapped to be used for Rituals but the Native Doctor said a superior power from ijebu already used her soul for Rituals and she can’t be used again,cos she’s USELESS
According to her; she travelled to Abuja to meet a friend she has known for sometime. On getting there the man was richer than she expected but she suspected something was wrong cos he can’t be so rich from selling only perfume oils.

They spent the night together and she was only getting credit alerts but he didn’t want to have secx with her cos he was saving her for Rituals. The 3rd day came he told her he will be travelling that she can stay in the hotel till anytime she wants to travel home.

According to her; that night by 2am someone came to wake her up, she said she can’t remember who,but she followed the person,only to see herself in a shrine and the only person she could recognise was her friend. (The guy she went to see in Abuja) and there were other girls too

So she was furious,trying to ask the people how she got there bt nobody was answering her. She said she watch them doing their enchantment and she also saw other girls were coming in, ( probably runs Girls) and they were all together,the ones they took out never came back

Then someone came to where they were and asked her to follow him she followed him again, on getting to the shrine they told her so sit inside a calabash, she did but nothing happened. Then the Native Doctor tied a leaf around her neck and Screamed!!! Saying they brought a corpse

He then called her friend (the guy she went to see in Abuja) in anger the Native Doctor slapped him and asked him if he’s not serious with performing the rituals and that he has 48hrs to provide someone or he’ll run mad. That she (my neighbours daughter) has been used previously.

She has been used previously and that she’s not worth anything, and anyone who comes incontact with her sexually also carries the same curse, and that’s how it’ll be till till eternity.He then called some people to throw her away. They came and carried her away. According to her
They dropped her in the middle of the road, with the intention that a trailer or truck will drive by and crush her to death.But luckily for her the driver saw her in the middle of the road Nakked n stopped.He took off his shirt nd covered her, moved her from the road n drove off.

According to her she was just by the road seeing people passing by but she couldn’t say a word, they probably thought she was MAD. So a relative from same village who knows her father saw her there and called her dad, that he saw her daughter sitting by the road looking Mad

And the Dad was shocked cos they’ve been trying to reach her on phone and her room mates in school don’t know her whereabout. They found her somewhere in ogun state and she came home this morning.

Her parents are making preparations to take her back to ijebu to trace where and who used her for Rituals. Imagine having a beautiful face and nothing good is coming your way cos nobody is seeing you, someone made you a walking corpse cos you’re desperately in love with money.

I used to think it’s a movie till it happened to my Neighbour. This is not a Story. It’s real; the World is Wicked. Be careful outhere please