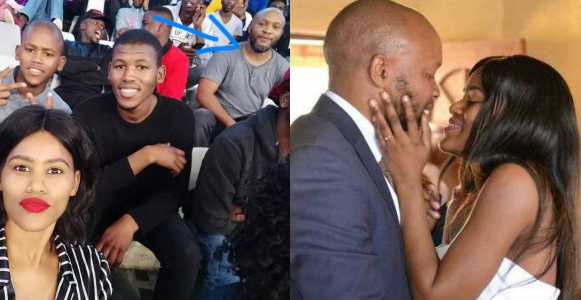 A South African woman has tied the knot with a man she met 7 months ago after he photobombed most of her photos.

The lady said she was at a stadium on the 14th of March to see a game with her brothers. But the man kept looking at her and got into every picture she took that day.

He later walked up to ask her out but she refused. However, he kept at it until she fell in love with him and a relationship began.

They finally got married on the 14th of October, only 7 months after they first met.

Read her story below;

It was 7 months ago on the 14 of March when love chose me in Green Point stadium. It was the Nedbank Cup,Orlando Pirates was playing against Cape Town City. My brothers had bought themselves tickets to the game,they didn’t get me one,for obvious reasons, that I never watch any soccer matches and have never had an interest to go to the stadium.

But this time I queued the long lines of last minute ticket sales and got myself and my cousin tickets.

We didn’t pay much attention to the match. We were excited about our first time at the stadium and we wanted everyone to know. It was selfie after selfie. Posted on whatsapp, until a friend noted the guy in a grey t-shirt photo bombing all my snaps and asked if I’ll give him the pictures.

Every time I turned back to my brother’s he was staring right at me. Then it was half time when he came down, running over the chairs to introduce himself. I gave him a hard since that day but he never gave up. On the 14th of October I chose love in return and became his wife.