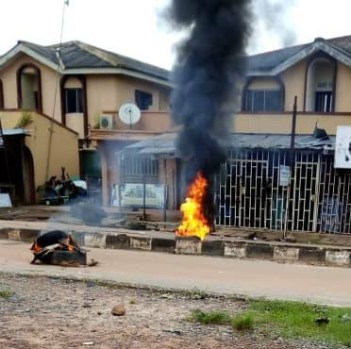 According to a report by Premium Times, the students of Ladoke Akintola University of Technology (LAUTECH) have shut down the institution’s main campus in Ogbomoso and also its medical school in Osogbo over an increment in their tuition fees.
It had been earlier reported how the institution at its 133rd governing council meeting which held on Thursday, July 5 decided that the hike will take effect from the 2018 / 2019 academic session.
The present 100 level students paid N120,000 for indigenes of Oyo and Ogun states and N150,000 for non-indigenes as part of the resolution of the institution after the university strike that lasted for months.
However, on Monday, the institution implemented its decision in a mail sent to all students. It said indigenes are now to pay N200,000 while non-indigenes are to pay N250,000 for the new session which will commence on October 29.
The new fees are against the initial N63,500 for indigenes and N72,500 for non-indigenes who are returning students.
The spokesman of the university, Lekan Fadeyi, has since then refused to answer calls and text messages sent to his line on this development. 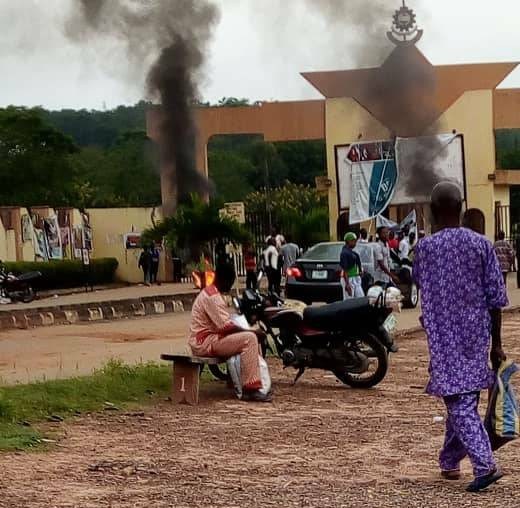 LAUTECH students burn tires to protest hike in fees
However, as early as 6:30 a.m. on Tuesday, Premium Times gathered that the students locked the institution’s campus gates in Osogbo and Ogbomoso and are now protesting with the hashtag, #OccupyLautech.
The closure has disrupted the flow of vehicles and also grounded day to day activities in the school.
The Students’ Union President, Abiodun Oluwaseun, who spoke with Premium Times in a telephone interview threatened that they will not vacate the gate unless the school reverses its decision.
“We have shut down main road in front of college of health sciences and also the school main gate. No retreat, no surrender. We have to fight this and make sure that irregularities does not reign,” he said.
Another student leader, Fawole Isreal, who is coordinating the protest in Osogbo told our correspondent that the authorities have erred by increasing the fees.
“During the preparation for Osun State election, the Chancellor of the varsity, Tinubu was boasting how only him is richer than Osun State. The same Tinubu has left LAUTECH to ruins by keeping mum and not showing remorse as a father on the situation of things. That is being irresponsible.”
Other students who reacted to the development also tagged the implementation of the decision by the university management as irresponsible.
“We can’t afford the money (fees). When workers are still fighting for minimum wage, the institution came up with hike,” a student, Aarinola Adegbite, said.
Another student, Kazeem Alli, told Premium Times that the university “is calling for another strike” by the increase.
AdvertisementABUJA DOCTOR REVEAL THE UNIQUE WAY TO PERMANENTLY CURE WEAK ERECTION, SMALL AND SHAMEFUL MANHOOD AND INFERTILITY ISSUES WITHOUT SIDE-EFFECTS WITHIN SHORT PERIOD!! DON'T BE A VICTIM!! Click Here for More Details