Lib vs Nig: ‘The Only Difference Between Ahmed Musa And Messi Is Spelling’ – See What Fans Are Saying About This Musa’s Goal(Video) 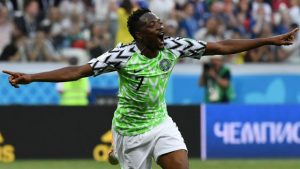 The Super Eagles of Nigeria are currently leading Libya 2-1 at half time in their African cup of Nations qualifier in Sifax, Tunisia. Nigeria took an early lead after some nice team work from the team presented Ighalo with the simple task of tapping into an empty net.

Former Leicester city’s striker, Ahmed Musa, then doubled their lead in the 18th minute by displaying some tenacity and pace to get into the Libyan defence from some lightning counter attacking move before slotting home.

As a result of his impressive goal, Nigerians have been on social media reacting.

The only difference between Ahmed Musa and Lionel Messi is spelling. 😊😊😊 #LIBNGA