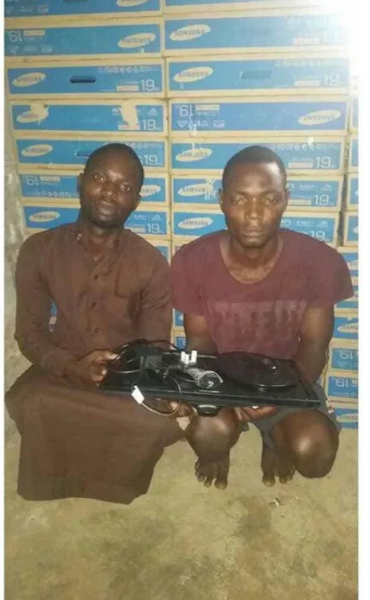 While we hear of evil maids who steal from the first day they are employed or kidnap their employer’s kids days after gaining employment, this 31-year-old salesman, Michael Daniel, allegedly stole a total of 52 computers 3 weeks after he was employed

Daniel has since been arrested for allegedly conniving with robbers to burgle the shop of his employer in Ogun State.

Police spokesperson in the state, Abimbola Oyeyemi, revealed that the suspect was arrested following a complaint by one a woman, Titilayo Ero, of Dorf Royal Events Centre, Asero Abeokuta.

He said the woman reported that she had about 52 computer monitors in her store only for her to discover, in August,that the store had been burgled and all the monitors carted away.

“Detectives swiftly moved into action and invited the salesman who was barely three weeks old in the employment of the centre. When he was thoroughly interrogated, he confessed to being the brain behind the dastardly act”.

He said the suspect explained that he invited one Smith Ajao, 23, to join him in the night for the operation, who was later traced to an hotel in Sango Ota, where he was arrested.

The police spokesperson said the suspects led detectives to Computer Village in Ikeja, Lagos, where 48 of the computer monitors were recovered. The suspects will be charged to court as soon as the investigation is concluded.