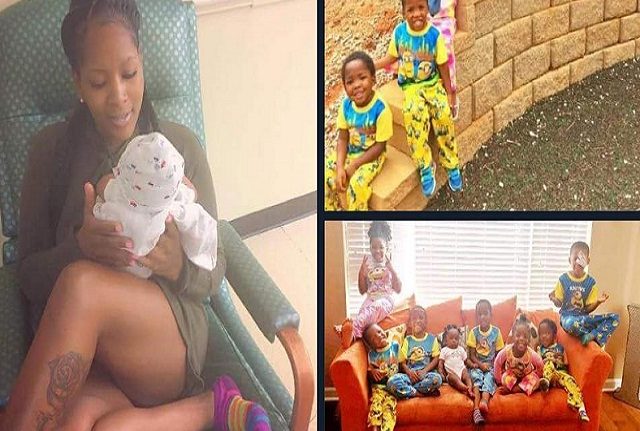 While some ladies are still struggling to be in any kind of serious relationship at 25, a photo of a yet-to-be-identified lady has emerged and gone viral on the internet as it is believed that she has already had 9 children at the tender age of 25 (as of the time the photos were published).

In the undated reports, it was learnt that the said lady delivered the kids as a set of triplets, a set of twins, and four single births.

According to multiple online outlets, the pictures – which she was said to have first published on Instagram – did not really indicate if she’s married.

She, however, made motherhood look unusually adorable!

It is believed that in one of her posts, she fired some shots at those who berated her for having so many kids at that tender age:

“Folks be so busy making fake pages tryna bash me for having 9 kids but don’t gotta take care of none of them. It’s love knowing that your greatness goes unnoticed by complete strangers… Yes it get hard, yes they work my nerves but I got my kids…

”I see lawyers, doctors & athletes,” she was quoted to have written on a post.