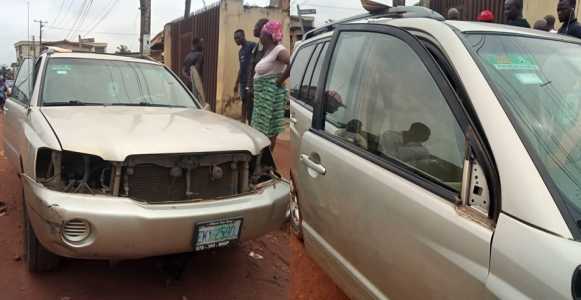 A Twitter user identified as @makemetola, has taken to the platform, to reveal how he fell victim of petty thieves recently, when he parked his car at a spot all night, only to wake up to several parts of the vehicle missing.

The frustrated robbers couldn’t take the car, but made away with parts of it in clear hope to sell it to customers looking to fix their cars.

The victim revealed that he heard some robbers were caught by the police with car parts in Surulere, and he expressed joy that they might have been the ones who made away with his tyres, side mirrors and several other parts of his SUV.

He shared photos of what is left of the car and wrote: “Heard that some robbers were caught in Surulere by the Nigerian Police and car parts were found with them.

“My Toyota Highlander 2003 was buggled and the following car parts were stolen brainbox, side mirror (both), control buttons & panels, 2 side linings, carbatt et.”

See more photos of the vandalized car below;