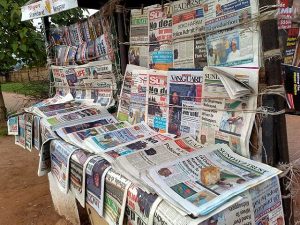 GOVERNOR Kayode Fayemi of Ekiti State is among the state governors attending the National Economic Council, NEC, meeting presided over by the Vice President, Yemi Osinbajo, at the Council Chamber, Presidential Villa, Abuja.

Governors of the 36 states of the federation Thursday said though they were not opposed to the ongoing plans to approve a new minimum wage, they lacked the capacity to pay.

The Economic and Financial Crimes Commission (EFCC) has re-arraigned a former governor of Katsina State Ibrahim Shehu Shema before Justice Hadiza Rabiu Shagari on a 26-count charge of conspiracy and money laundering.

The Kaduna State House of Assembly says it will pass the Whistleblower Protection Bill and the Anti-corruption Bill by next week, as part of commitment to open governance in the state.

The Federal Executive Council (FEC) has approved the implementation of the no-work, no pay principle when workers go on strike in the federal public service.