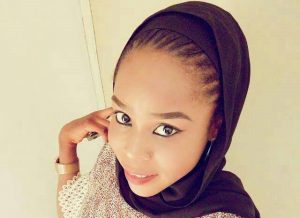 Hauwa Leman, an aid worker with the International Committee of the Red Cross (ICRC), who was executed by The Islamic State West Africa Province (ISWAP), a faction of Boko Haram, has stirred a hive of reactions among many Nigerians.

Even the federal government has expressed its ‘pains’ over the murder he young woman.

Minister of information, Lai Mohammad said the government did “everything any responsible government should do” to save Leman and Saifura Ahmed, another aid worker that had been killed in like manner.

Leman, who was killed on Monday, according to the video was forced to kneel down, with her hands tied inside a white hijab which has a crest symbol, and then shot at close range.

Mohammed revealed that they did all it could, to rescue her, ensuring that all negotiations were open.

The statement by the Information Minister reads thus:

“It is very unfortunate that it has come to this. Before and after the deadline issued by her abductors, the federal government did everything any responsible government should do to save the aid worker.”

“As we have been doing since these young women were abducted, we kept the line of negotiations open all through. In all the negotiations, we acted in the best interest of the women and the country as a whole.

“We are deeply pained by this killing, just like we were by the recent killing of the first aid worker. However, we will keep the negotiations open and continue to work to free the innocent women who remain in the custody of their abductors.”

The terrorists have also threatened to enslave Leah Sharibu, who has remained in her captors’ den for refusing to denounce her faith, would remain their slaves for life.