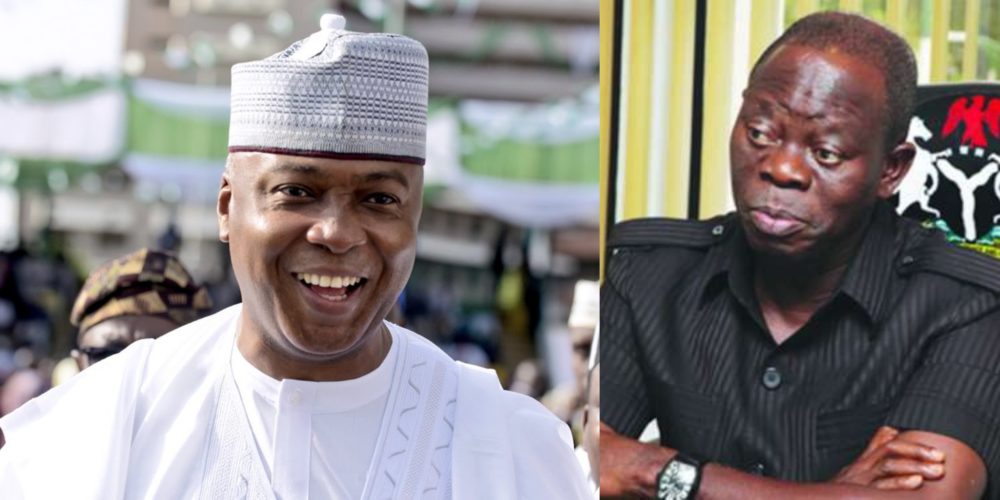 Senate President Bukola Saraki has said that the National chairman of the All Progressives Congress (APC) has dragged the ruling party to a civil war.

The Senate president said this in a statement his Yusuph Olaniyonu, his spokesman entitled  “Response to APC Diatribe.” Saraki said Oshiomhole alongside the party’s publicity secretary, Yekini Nabena have dragged the ruling party into the lowest low.

Saraki,further stated that by Oshiomhole’s actions and inactions, APCis now wallowing in disorganisation and confusion, yet they still have time to poke their noses into his business and that of the People’s Democratic Party(PDP).

We have noted the irresponsible statement issued by the APC spokesman, Yekinni Nabena. We know that he and the leadership of the APC are always incensed and disturbed at the mere hearing of the name, Saraki. It is also notable that Nabena and the APC are always concerned about the developments in the opposition party, the PDP.

“However, we believe that with the ‘civil war’ that Adams Oshiomhole and Yekinni Nabena have ignited in the APC and the very low level that they have dragged the party, in such manner that the ruling party is wallowing in confusion and disorganization, they have too much to pre-occupy them than to be poking their noses in what happens to Saraki or the PDP.”