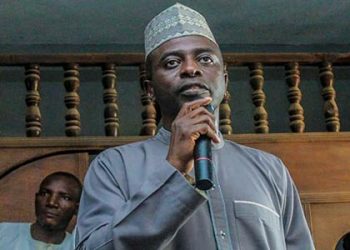 A member of the House of Representatives and former Speaker of the Kwara State House of Assembly, Barr. Razak Atunwa has emerged the governorship candidate of the Peoples Democratic Party (PDP) in Kwara state.

Atunwa, a former commissioner for Information and Works in the state polled 1,555 votes to beat his rival, a former governor of the state and serving senator, Alh Mohammed Sha’aba Lafiagi who scored 578 votes.

The conduct of the PDP governorship primaries, which started on Sunday, was declared inconclusive when the peace process was disrupted abruptly by some aggrieved delegates who alleged that the process was been manipulated.

Before the commencement of voting by the accredited 2,227 delegates from the 193 wards in the state, some guber aspirants such as Ladi Hassan, Saka Issau (SAN), Zakari Muhammed and Ali Ahmad all stepped down from the race while, Mallam Bolaji Abdullahi, Muhammed Ibrahim Ajia, Prof. Abubakar Sulaiman, Aliyu Ahman Patigi – all boycotted the exercise.

The state governor, Abdulfatah Ahmed, who said that the nine aspirants withdrew from the race because of the party’s interest, thanked them for their act of magnanimity.

The governor also thanked the state’s political leader, Dr. Bukola Saraki, for his wise counselling and purposeful leadership which, he said, had kept members of the PDP united in the state.