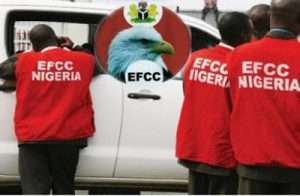 Governor Ayodele Fayose, who will be leaving office as governor of Ekiti state today, has raised the alarm, that some men unknown to him, have been hovering around his premises.

The governor who revealed this via Twitter on Monday night said, he had made it clear that he would make himself available at the Economic and Financial Crimes Commission(EFCC) office, the day he leaves office but can not decipher why he’s been monitored.

Recall, that the EFCC had written to Customs to place the Governor on a watchlist, saying he has plans to abscond from the country, soon after he ends his tenure.

However, the governor in his tweet on Monday, said he is aware of a planned invasion but would still make it down to the commission’s office, regardless.

It is known to the public that I  offered to make myself available at the EFCC office today.However, as I write,there are strange movements around my residence & I'm aware of planned invasion any moment from now.Despite this,I'Il be at the commission's office tomorrow as promised