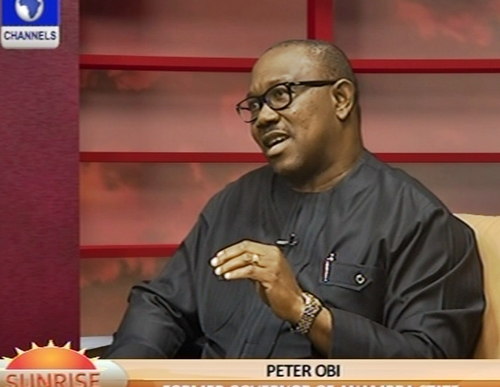 We reported on Monday that Vice-President Yemi Osinbajo, on Sunday in Abuja, jocularly said he was learning the ‘Shaku Shaku’ dance steps for campaigns ahead of the 2019 general elections.
The VP was quoted as saying: “I can never forget my dear friend in one of the states who just danced his way through the campaigns; all he did was dance; he did nothing else but dance and he won 250,000 votes. So myself and Kabir are now learning Shaku Shaku; we have to learn; who knows what will win.”
In a swift reaction while speaking with journalists at the Nnamdi Azikiwe airport in Abuja upon his arrival from Dubai where he interfaced with PDP presidential candidate, Atiku Abubakar and other party strategists, said that for the Atiku team, what was paramount was “spending our time with the best minds on how to start creating jobs and putting food on people’s table and not learning how to dance Shaku Shaku”.
The former Anambra governor said; “I have not had the opportunity of reading his comments as I haven’t seen the dailies. I know Vice-President Osibanjo is a gentleman and may not have made such a comment.
“However, while I am not against people dancing or learning how to dance ‘shaku shaku’, as I believe it is one of those things that is keeping our people going on in this very difficult times, I believe that the crossroads that we have found ourselves in as a nation requires sober reflection.
“For me in particular, this period calls for sober reflection not dancing or learning how to dance as there are many challenges facing our nation at the moment. Not the least being recently having our country named the world headquarters of extreme poverty with over eighty seven million people. Worse still millions more are losing their jobs, with four million by the third quarter of this year alone.
“Millions of Nigerians go to bed hungry not knowing where the meal for the next day will come from, hundreds of thousands risk death by crossing the Sahara and the Mediterranean Sea to wherever they can make a living.
“These and other challenges are indicative of the dire straits facing us as a nation today. And these are what we on the Atiku team are spending our time with the best minds on how to start creating jobs and putting food on people’s table. We must get Nigeria to start working again for the good of everyone.”