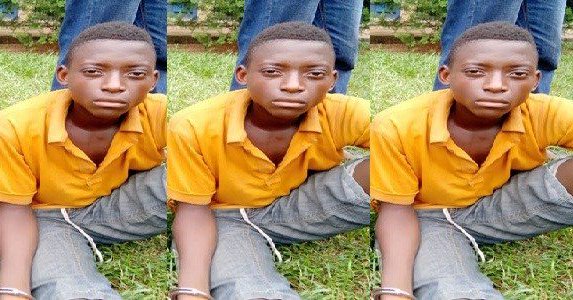 The police in Edo state have arrested a 16-year old houseboy, Zakaria Chiahemba, for allegedly killing his boss, 51-year-old Rejoice Odogwu, and stealing her belongings at her home on number 25, Osazuwa Street, Oluku in Ovia North East Local Government Area of Edo State.

Parading the suspect before newsmen, the state commissioner of police, Babatunde Kokumo, said Zakaria used an axe, cutlass and stick to kill his boss and afterwards carted away with her money, phone and jewelry and fled the scene after the incident. The search for him yielded result last Friday November 23rd when he was apprehended in Taraba state.

When paraded before newsmen, Zakaria denied killing his boss, claiming that some customers of the deceased had stormed their home on the day of the incident and attacked her, after saying that their phones were stolen at her shop and that she did nothing to help them recover their stolen items.

The police boss said the suspect will be arraigned in court immediately investigation into the matter has been concluded.