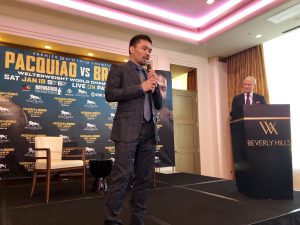 Boxing legend, Manny Pacquiao, has said he plans to reunite with his long-time trainer, Freddie Roach. The Filipino boxer ended his association with the veteran trainer ahead of his victory over Matthyse in Malaysia in July. Pacquiao said in a press conference in New York on Monday that he would love have Roach back in his corner for his January 19 against Broner in Las Vegas.

However, Pacquiao reiterated that Roach would only be back in as a “Supervisor” and an instructor to Buboy. “I don’t have any problem with Freddie Roach. All I say is that I think the other work in training should be assigned or designated to Buboy. Freddie can supervise or instruct Buboy, that is what we’re going to do” Pacquiao said at a media roundtable. Roach, however, said he has not been in contact with Manny since 2017 and insisted that he wasn’t getting back to Pacquiao until he receives an official call from him.

“I still have never directly spoken to Manny since 2017. I’m not going to make a move until Manny calls me”

The 40-year-old said loneliness prompted him to return to the ring. He has not fought in the United States for two years. “When I stopped boxing, I just realized after watching some fights, I feel so lonely. Despite my work in the senate, I really miss boxing. Boxing is my passion, I grew up in boxing”