A widow from Anambra state identified as Mrs. Anthonia Aniemene has reportedly died after allegedly forced to drink a concoction by her husband’s relatives.

It was gathered that the woman married to one Elder Emma Aniemene was allegedly forced to take the concoction over her late husband’s properties.

OPEN LETTER TO HIS HIS EXCELLENCY CHIEF DR WILLY OBIANO ON THE TOTURE, DEPRIVATION, HUMAN RIGHT ABUSE, CONFISCATION OF LATE HUSBAND’S PROPERTY AND THE EVENTUAL KILLING OF MRS ANTHONIA ANIEMENE BY HER HUSBAND RELATIVES.

Her husband late Emma Aniemene has a landed property along Idigo Road, Amaeze Aguleri with five buildings, one decked building and four bungalows, the said land was a gift that the late Igwe Aguleri gave to his father, as a reward for his service to him.

That the late Elder Emma Aniemene has an Elder brother, from a different mother, whose name is late Mr. John Aniemene who when their father died sold the said property throwing both Elder Emma and his mother out in homelessness

That the late Emma and his mother together with one Rev. Father contributed money paid the man that bought the said land double of what he bought the land, thereby reclaiming the land.

That late Emma Aniemene single handedly developed the property and later called back his elder brother who was now on self-exile and gave him one bedroom apartment since he was now homeless.

That the late John Aniemene had an only son, Chimezie Aniemene, who practically was trained in school by Emma and wife but because he being not too intelligent was asked to learn a trade in the Onitsha main market, then after learning the trade, he was duly settled by his master, but he spent all his fortunes in revelings and riotous living and soon began to be in want.

That Chimezie at this time got married and because he couldn’t feed his family left Onitsha to Aguleri to start dragging house rent with Mrs. Anthonia in her husband’s property.

Chimezie and wife at countless number of times had beaten Anthonia, destroyed her house and economic trees and emotional trauma on her, because they felt she had no child.

That because of these torture and oppression Anthonia Anieme became hypertensive, diabetic and depressed and that this sickness was known to all Aniemene family member yet no one came to her rescue.

That this matter of land tussle had been brought before the larger family and he had been asked severally to leave the woman and her husband’s property alone, yet he refused.

That on the 2nd of January, I personally went to see Mrs Anthonia Aniemene who happens to be my Aunt and foster mother, she asked me to drop her off at Ivite Aguleri, that the Aniemene’s have put a meeting to reconcile the issue, only for her to get there one Mr. Joe Aniemene, ,Chibuzor Aniemene, and Chukwudi Aniemene bundle her in a waiting vehicle to an unknown destination. They bought a juju priest, who mixed a substance and asked her to drink it, she refused, telling them that it is against her faith, meanwhile they had already torn her clothes, her bra and undies and made her naked.

They tortured her beat her and forced her to drink the concoction (attached are the photos and videos of what they did to her). Not taking into cognizance that she was under hypertensive and diabetic management, everything about her health took a downward turn from that moment till she died.

That we went to Out-ocha Divisional Police to make entry and they gave us officers to go with us, the Animene family beat up both the people and the officers that went.

(attached is Mr. Chukwudi Aniemene’s confession on facebook, boasting that they really beat up the police officers).

That since that day they gave her the substance that her health deteriorated and there was no medical solution, I have taken her to at least five hospital that gave up on her case, till she died.

That, that to prove that her husband people are complicit in her death that up till now they have not asked and they have not visited us. That all the emissaries we sent to inform them of her death were ignored.

That the killers of my Aunt, namely, Chimezie Aninmene and wife, Joe Aniemene, Chibuzoe Aniemene ,Chukwudi Aniemene and others be brought to book and tried

That Chimezie be arrested and family be made to exit the said property indefinitely so as to allow us conduct proper burial for our sister.

That they write undertaking concerning the safety of both me and my family (Attached is the pacebook death threat Chukwudi Aniemene sent to me). 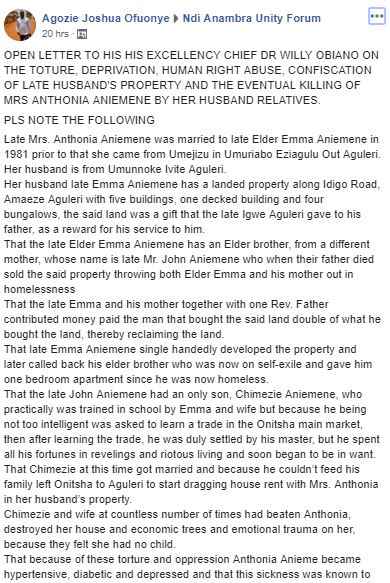 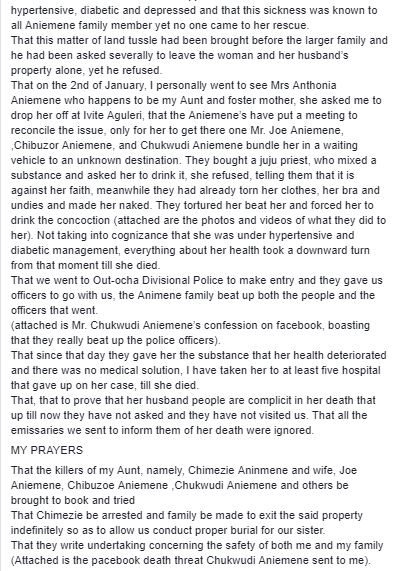