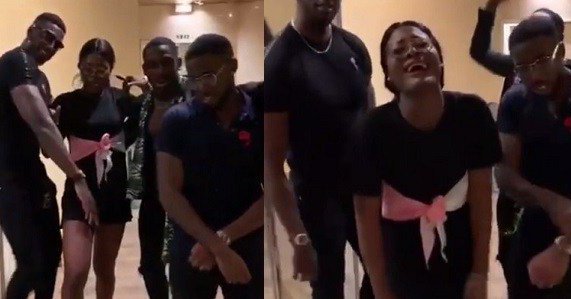 Former Big Brother Naija housemate, Alex Asogwa not long ago, took to her Instastory to share a video of herself dancing with popular Instagram celebrities, ‘Kupe Boys’ and she certainly had fun from the looks of it.

See screenshots from the video below,

The Kupe boys who went viral and became a sensation after they danced to the popular song, Kupe, arrived Abuja today on the 15th on the invitation of the Play Network Africa. But only three out of them, came to Nigeria.

In some photos circulating Twitter, the boys were seen sitting on the floor at a Nigerian airport.

It’s unclear why they were made to sit on the bare floor, but Nigerians have been sharing the photos across social media with hilarious reactions.

Share
Facebook
Twitter
WhatsApp
Previous articleLovely photos of burn survivor and her two kids melt hearts on social media (Photos)
Next articleAs soon as PDP announced that Ndi’Igbo has endorsed Atiku, I got calls from well-meaning leaders telling me to disregard the report – Buhari
- Advertisement -