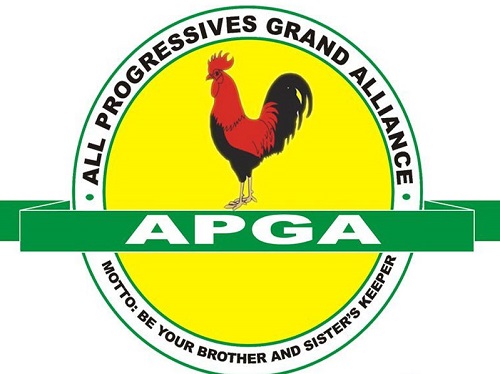 The body which recalled various issues that have bedevilled the All Progressives Grand Alliance (APGA), in recent times, especially after the party primary elections, noted that Dr. Oye has taken APGA beneath the point he met it.

He said; “At no time in its history has a chairman of APGA been so associated with widespread accusations of bribery, extortion and other unwholesome acts.”

The factional body also condemned what it said “The demeaning and wicked treatment meted out to the widow of pioneer APGA leader, Her Excellency, Ambassador Bianca Ojukwu, and other loyal members of the party.”

Obasi said, “You are no doubt aware of the various issues that have bedevilled the All Progressives Grand Alliance (APGA) in recent times, especially after the party primary elections.

“Accusations of bribery amid non-conduct of election trailed the nomination of candidates for the 2019 poll. In all these developments, it is obvious that APGA is no longer run as a political party, but as a private limited liability company.

“Having approached this crossroad, we are of the opinion that the situation calls for a radical solution. We have to decide whether to continue on the evil trajectory of impunity and political villainy or adopt a strategic template to guarantee the revival of the fundamental ideas that propelled the formation of APGA.

“Based on the foregoing, we have come to the inevitable conclusion that we must come together to recalibrate APGA in line with the dictates of our shared values and ideological purity of being our brothers’ keepers indeed.

“We must purge APGA of political wickedness and selfishness, particularly the myopia that made the party speak from both sides of the mouth regarding its future and preparedness for the nation’s electoral environment.

“The original and foundational ideology of APGA is that it should be inclusive and guarantee the rights of members to express themselves in line with democratic principles. It is obvious from prevailing circumstances that APGA has derailed and lost the moral compass that endears it to marginalised Nigerians.

“There is urgent need therefore, for loyal and genuine members of the party to embark on a programme that would bring back the party to the original ideas. This programme would involve the reconciliation and unification of all those that fought through thick and thin to ensure that APGA serves the purpose of political emancipation of all oppressed people.

“As first in the line of pragmatic steps leading to the recovery of APGA, we announce to you the birth of Authentic All Progressives Grand Alliance (AAPGA). We are committed to retaking and recovering our party from buccaneers and charlatans, whose ideology is to do merchandise with the collective will of the people.

“Under this new beginning of APGA, we intend to reach out to all those who have suffered injustice, impunity and deprivation with a view to refocusing the party in line with the original ideology and principles.

“We are determined to ensure that APGA should not suffer extinction in the hands of political travellers, especially those who are without APGA membership cards yet masquerading as leaders at the highest echelon of the party.

“The path we have chosen is by no means an easy one, but we are resolved that in order to address the series of injustice, marginalisation and exclusion in the party, we have to confront these internal enemies of APGA, who are blinded by pursuit of vanity and filthy lucre.”

Obasi noted that, “Based on the above scenario, we the authentic members of APGA, otherwise called Authentic All Progressives Grand Alliance, AAPGA, during our extraordinary National working Committee, NWC, meeting resolved as follows:

“That we hereby call on Governor Willie Obiano of Anambra State to resign his positions as governor, Chairman of Board of Trustees (BoT) and leader of APGA forthwith.

“That Dr. Victor Oye, the embattled national chairman of APGA, should resign from his position as chairman, having failed to improve the fortunes and good image of the party. He has rather taken APGA beneath the point he met it. At no time in its history has a chairman of APGA been so associated with widespread accusations of bribery, extortion and other unwholesome acts.

“The complaints from Imo, Abia and Anambra State chapters of APGA, to mention but a few, detailing the exchange of bribes in foreign and local currencies, are too weighty to be swept under the carpet.

“That the party should look into the activities of some elements masquerading as APGA UK, with a view to ascertaining the statuses of their membership and means of livelihood.

“That AAPGA condemns in very strong terms the invasion of Anambra State House of Assembly in a commando and Gestapo style. A clear line of demarcation should be drawn between criminality and gangsterism in the name of party politics.

“That we condemn the demeaning and wicked treatment meted out to the widow of pioneer APGA leader, Her Excellency, Ambassador Bianca Ojukwu, and other loyal members of the party.

“That the threat by Oye to suspend Ojukwu’s widow is the height of irresponsibility and political rascality unbecoming of a national chairman of APGA and we hereby call on Oyeto retract the threat with a public apology with immediate effect.

“That Authentic APGA should set up three standing committees as follows: (i)Political Evaluation Committee, to assess, monitor crucial issues in the polity as the nation prepares for the 2019 election (ii) Rapprochement Committee, to reach out to mistreated and aggrieved members and (iii) Fiscal Complaints Committee, to compile cases of fiscal malfeasance and recommend appropriate remedial measures.”