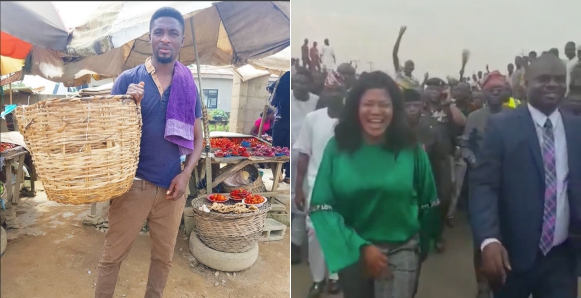 Toyin Abraham’s ex-husband, Adeniyi Johnson posted a photo of himself at a place that looks like a local market and captioned it ‘bless my hustle oh Lord’.

A ‘fan’ then replied telling him how his lost treasure was taking a walk with the Vice-President and APC Lagos State Governorship Candidate, Sanwo Olu, and he’s here disturbing them with his “basket” photo.

She wrote, “The treasure you lost is taking a walk with the Vice President and incoming governor and you are here disturbing our timeline with your ampere photo… Egbon e ti ni fault”

Niyi replied, thinking he gave a savage response but he got more than what he bargained for.

He wrote, “Stop writing like a fan wrote like you… let the world see your bitterness and pain”.

The supposed fan also responded, “Tani fan werey”, which loosely translates to “who is the fan of a mad man?”