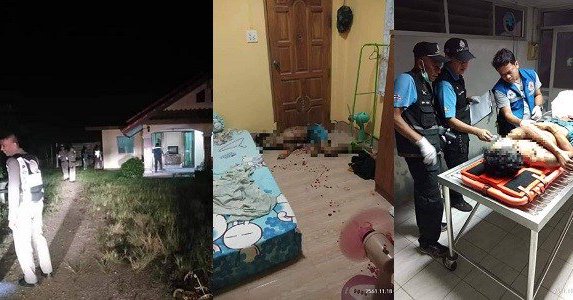 A 64 year old man arrived at Huay Yot, Trang, police station, Thailand, on Sunday, to say that he had just killed a man with a shotgun in self defense.

Nat had then discarded the gun by the road on the way to the station. The gun was later retrieved and examined.

Police found 35 year old Apichai Cheuanut dead in Nat’s house. He had died instantly and had nine holes from the blast.

Apichai was lying in a pool of blood by a bed and door and had reportedly climbed into the daughter’s bedroom via the window.

Nat told officers on Sunday that he had been asleep in front of the TV with his wife when he heard his daughter cry out.

He picked up the gun lying by the bed and went to his daughter’s room where he shot the intruder.

He has been charged with homicide and weapons offences.