According to a report by New Telegraph, a grieving sister, Mrs. Folawewo Opeyemi, has revealed in chilling details how an official of the Nigeria Security and Civil Defence Corps (NSCDC) allegedly shot her brother, Abdulqudrid Toefeek Omotolani (31), twice on the head at close range.

The incident occurred at the Pipeline Ile-Epo area of Lagos. Opeyemi, recounting the incident amid tears, identified her brother’s killer as Osho Kehinde.

She said: “The NSCDC official who killed my brother is Osho Kehinde. He and his colleague, Ohiafi Tunde, a Chief Corps Assistant with service number 15093 carried out the act. Ohiafi ran away after the killing, unfortunately for him, his identity card fell. We picked it up when we went to retrieve our brother’s corpse from the scene of the murder. Osho shot my brother twice on his head at close range. We want government to intervene and bring them to justice. We want them killed for killing our brother.”

Meanwhile, police detectives attached to the Homicide Section of the State Criminal Investigation and Intelligence Department (SCIID), Panti, Yaba Lagos, are now quizzing Osho over the shooting incident, which occurred on Sunday.

Opeyemi added: “My brother, Tofeek Omotolani, was a driver with BRT. He stepped out to buy recharge card, close to our house at Pipeline area of Ile-Epo when he was murdered. Some NSCDC personnel, who were smuggling petrol from pipelines were attempting to escape through the street, but were stopped by some youths. The youth insisted that the NSCDC officials wouldn’t be allowed to pass with the fuel. One of these officials got down from their vehicle and opened fire. The bullet hit my brother on the head and then he shot him again a second time. He took his colleague’s gun and pointed it at the youth, while his own gun was pointed at my brother’s corpse. He dared anyone to come close. It was policemen that later came and disarmed him.”

The Lagos NSCDC Public Relations Officer (PRO), Miss Kehinde Bada, an Assistant Superintendent of Corps, while reacting to the incident, said it was an attack on corps officials.

Bada said the incident occurred at a security post manned by men of the corps mandated to guard and protect the pipelines at Abule-Egba area, Oke-Odo.

She said: “A group of youths, five in number, suspected to be vandals attacked the NSCDC post on Sunday about 9p.m. to steal the firearms.

“This led to a scuffle between the officer on duty and the suspected vandals during which the victim pulled the trigger while trying to disarm the officer and unfortunately lost his life.

“This is an attack on the NSCDC officer. However, investigation has commenced and necessary procedures will be followed. The corps values the lives of citizens of the country and will in no way take life of another.”

Bada added that the NSCDC official involved in the incident was taken into police custody for safety as he called for back-up from the nearest police station.

The state Police Public Relations Officer (PPRO), CSP Chike Oti, confirmed that the NSCDC official was in the custody of the SCIID, Panti, Yaba.

Oti said the NSCDC official, arms, ammunition and other items used for their operation were evacuated from the scene of the incident to the Homicide Unit of the SCIID for investigation.

He said: “We are yet to get details of what happened. There was a distress call that someone was killed in Abule-Egba area. Our men went there to rescue the NSCDC operative on duty.

“The police rescued the operative, arms and ammunition and other materials they used for their operation to the Homicide Unit of the SCIID, Panti. Investigation has commenced.”

Below is a photo of the muredred man. 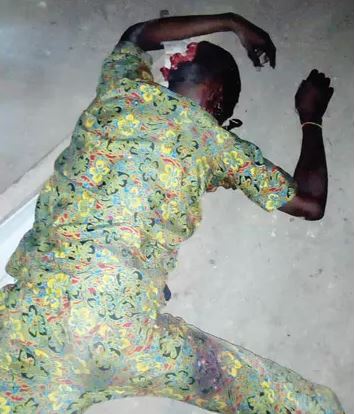