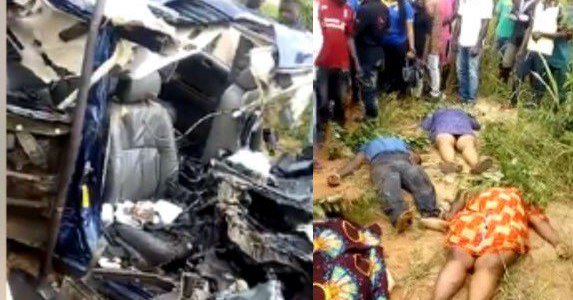 A family of four, an unidentified man, his wife, daughter and mother in-law have been killed in ghastly accident in Anambra state.

A source said the crash happened owing to a head on collision between the two automobiles.

The victims, who were said to have been rushed to a nearby hospital were confirmed dead on arrival.

The Police Public Relations Officer in the state, Haruna Mohammed who confirmed the accident said the corpses of the victims had been deposited in a morgue. Mohammed said;

“There was an accident involving a Tipper and a Toyota Camry along Nkwelle Ezunaka junction in Onitsha.

“The accident occurred when the two vehicles had a head on collision. As a result of the accident, the Driver of the Toyota Camry, one Mr Godwin Akaeme and three other passengers in the car comprising his wife, daughter and female in-law whose names are still unknown sustained various degrees of injuries.”

He added, “Police Patrol team attached to 33 Division visited the scene and rushed casualties to Apex hospital for treatment but unfortunately all the four victims were certified dead by the medical doctor on arrival.”

The PPRO said the Tipper driver, one Ebuka Ekene, who sustained minor injuries was treated and subsequently arrested.