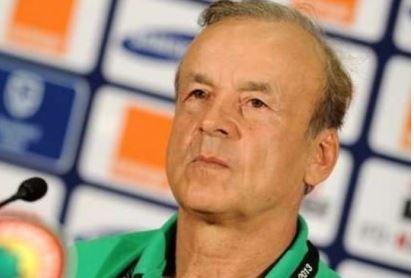 Super Eagles coach Gernot Rohr on Friday spoke to journalists in Lagos on issues concerning the national team during the Peak Breakfast with Rohr show. ’Tana Aiyejina’ was there

What was going through your mind when the referee Bakary Gassama disallowed two of your team’s goals – which replays showed were good goals – against South Africa?

When you are on the side and watching the game, you might not really know if it’s offside or not. I saw it only after the match, when we saw the pictures. I didn’t criticise the assistant ref but I saw that and I told them later. When you have very quick players like Ahmed Musa, I can understand that the assistant ref cannot follow. Our players were too quick for them (refs). It’s impossible to judge, they need to have the technology. I feel the refs wanted to do well. Gassama did well, it was not his decision, it was the assistant ref’s. They were clear goals, of course we saw it after. Normally, we could have won the match with the (disallowed) goals. I saw victory (against South Africa) but the 1-1 draw was like a victory because it brought us qualification. But we just don’t want to qualify; we want to be leaders of our group. That means we have to beat Seychelles. I hope that we can play under good conditions, this match, to finish well. And also, I hope we would have refs who would not make mistakes like we saw against South Africa.

Why did you play forward Samuel Kalu at right wing-back in that particular game?

I know Kalu very well because he’s playing in Bordeaux (my former club as player and coach). I see a lot of his games in the team. They bought him for €8m from Gent after they scouted him for two years.  Kalu is a good striker and also a good defender; he can run forward and he can run on the lines on the right side, he can do some tackling, so that’s why we wanted to play 3-5-2. We wanted him in the role we used Victor Moses against Iceland. And it’s a big commitment. I think he did well in this match. He made some good tackling and he brought the goal. It’s interesting to see that in different systems, we have players who can adapt.

You had the youngest team at the 2018 World Cup. Do you think the team is still too young to win next year’s AFCON in Cameroon?

I don’t agree. We have a young team but you can be sure that they can improve. If you go somewhere, the aim is to win and with the World Cup experience, the players have to show that they’ve overcome mistakes like not being able to hold on till the end against Argentina. We showed it already in South Africa, it was a similar situation. We needed a draw to qualify and we didn’t make the same mistake against Argentina, where the players forgot a little bit to defend the result and not to go forward. I think this young team is on the right way and I don’t think they are too young to win it. We have six or seven months to prepare for the competition and if we have good preparations without injuries, we can be one of the teams who can hope to win the AFCON.

Which areas of the team do you think needs improvement?

The goalkeeper is very young and still improving. He’s just 19, you can’t be at the top especially in that position, when you are only 19. In the defence also, (Leon) Balogun is not playing in his club, it’s a problem. He was not really fit in South Africa, but I hope he will play much more now. We have to search for solutions in the defence. We’ve found a solution in the left-back. We found this player in Germany (Jamilu Collins) giving us this satisfaction. Now we have to also watch the midfield again because some players can be injured or suspended like it happened in South Africa. We saw John Ogu, he did very well, he’s experienced and powerful. We have the young (Oghenekaro) Etebo playing in Stoke but he has to improve. We saw again Mikel Agu, who did well in Asaba and we are still searching for other opportunities in this department. Also, our strikers, we saw Ighalo’s comeback, which made us happy but we have to search.

Mikel Obi hasn’t played for the national team since Russia 2018 while Victor Moses retired from international football. What’s the situation with Mikel and have you found a replacement for Moses?

The situation with Mikel is that after the World Cup, he wanted to take a little break from the national team. And the other time we were in touch, he told me, ‘honestly I’m not fit. But when I’ll be fit, I‘ll let you know.’ He was injured in the last games of his club, so he could not come. We will see what happens in the future. I was surprised Victor Moses wanted to stop after the World Cup, I tried to convince him but I didn’t succeed. He said he would have to focus on his club and I hope now, he will have the opportunity to play again in this club (Chelsea) or another one. FIFA window will open in January, perhaps he can change the club and find a club he can play, he’s only 27 years old.

Villarreal winger Samuel Chukwueze wore the number 10 jersey on his debut against Uganda. Would you say you’ve found a replacement for Mikel Obi?

Sometimes, the number 10 can play 11 or seven. Wearing the number 10 jersey doesn’t make you the matchmaker. The real number 10 in our team is Alex Iwobi and he’s doing very well in the position. I saw Chukwueze in Villarreal and a lot of people are surprised that I invited him. He’s young but he’s doing very well giving us promises on the right wing. He can also play on the left wing. What we are searching for are left-footed players. We only had Kelechi (Iheanacho) as our only left-footed player at the World Cup. We played some games without a left-footed player and when you have a team without one, there’s a problem. There’s a law in football, that you must have at leat one left foot in the team. Sometimes I searched and we didn’t find but now we have Chukwueze and I think he will do better and better knowing how we play. There will also be a competition in the team now for the positions. We also have the left-footed Collins, Ogu and Kelechi. The left foot plays a highly technical football sometimes more than the right foot. What we need is a good cocktail from players with right foot, left foot, good headers like (Kenneth) Omeruo and the quickness of our wingers to bring our team forward.

Did the NFF leadership crisis affect your team, and did you think of quitting because of this?

After the World Cup, a lot of people felt we had a good performance. When we got to the airport, the people from downstairs and outside, everybody said, ‘bravo for your efforts. Even though you didn’t get to the second round of the World Cup, you won the hearts of Nigerians.’ But then came the leadership problem of the NFF and we couldn’t do anything. We wanted to work, but we could not even go to the NFF Abuja office. We waited for the solution and of course, we supported our president (Pinnick) knowing that he did well. I saw that in the past in Nigeria, the NFF president spent only one term of four years. But it’s not enough to develop a programme and to continue planning. We have a good philosophy now; there are lots of sponsors coming, because we have a good team and image. This lasted for more than a month and we were afraid only once when I heard that we could be suspended for the AFCON. I called the NFF president and said, ‘I will feel very bad if we are suspended from AFCON because there will be no work for us. I have to go.’ He said, ‘don’t worry. It will be okay.’