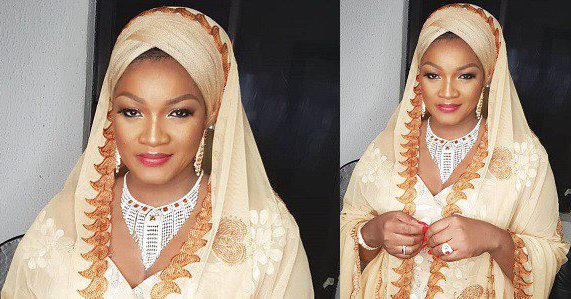 Popular Actress, Omotola Jalade Ekeinde has revealed that she was born as a Muslim, but practices Christianity.

The actress who looks stunning in a Muslim regalia used the opportunity to preach religious tolerance.

She wrote: “Although I was born Muslim… Today I practice Christianity. However, growing up in Kaduna … I’ve witnessed some horrors that eyes should Never see… All because of Religious divides and intolerance… Faith should make us better Humans… Any Act that does not show love does not serve God or Humanity. Love your Neighbour …. AS YOURSELF. Peace.”

Meanwhile, Omotola Ekeinde took to her Instagram to write her husband, Captain Matthew Ekeinde, a heartwarming tribute as he turns 50 a few month ago which also happens to be their 22nd wedding anniversary.

Posting on her page, the legendary actress described the pilot as the ‘captain’ of her heart, whom she has shared 22 adventurous years with, adding that their love continues to grow strong.

“Happy 50th to a unique, different, one in a lifetime man. King Matthew Ekeinde. President of Aquatic Jungle Inc. Capt of many planes and my heart,” she wrote, adding, “I usually forget it’s our wedding anniversary too.”

She continued, “WOW! 22years! Thanks for my wakeup Gifts Hb! This picture captures how we started and where we still are. In his presence.
I love you Honeyboy. #Happybirthday#happyanniversary to Us.”