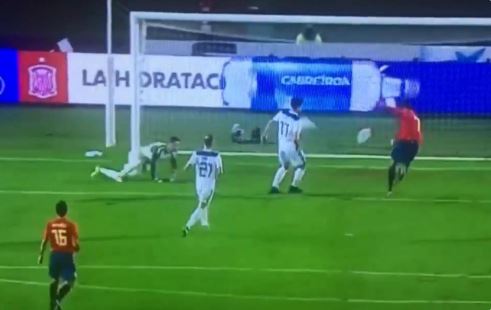 Alvaro Morata, a Chelsea striker endured a difficult evening in Spain’s 1-0 friendly win over Bosnia and Herzegovina, missing an open goal from inside the six-yard box.

Spain debutant Brais Mendez settled the game 11 minutes from time when he turned home the rebound after Isco’s effort had been saved.

But before that Spain wasted a series of chances in the second-half with Morata the main culprit.

The Chelsea striker missed the target with a free header shortly after the restart, before firing a shot over the crossbar when he raced through on goal.

Morata’s poor night continued after 58 minutes when he somehow bundled the ball wide from inside the six-yard box after Marco Asensio’s shot was pushed out into his path by the goalkeeper.

In the end the misses didn’t prove costly as Mendez’s goal secured Spain victory but it will certainly be a night Morata will want to forget in a hurry.

Watch the video of Morata failing to score below: