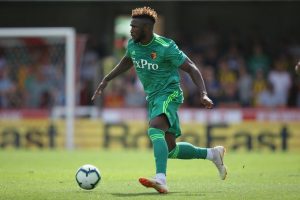 Super Eagles forward, Isaac ‘Great Success’ Ajayi has signed a new five-year deal with English Premier League side, Watford. The former Golden Eaglets star joined on a permanent basis from Spanish side, Granada, in 2016. He spent half of the 2017-18 season on loan at Malaga.

Watford Chairman, Scott Duxbury, told the club’s official website: “This is just a reward for Isaac’s continued hardwork and application this season. We look forward to seeing him develop further over the coming years. Meanwhile, the 22-year-old has enjoyed a fine start to the season, featuring 15 times across all competitions for Watford, scoring three goals.