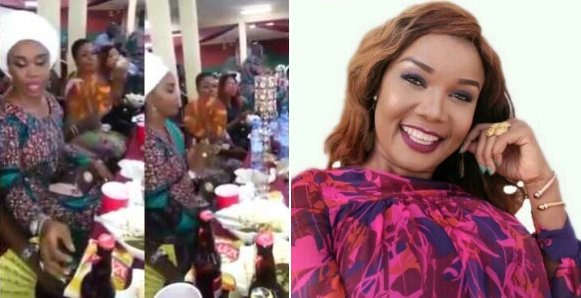 Few days ago, The Assistant Commissioner Of Police, Abayomi Shogunle, declared the lady in a viral video, who was stealing everything on her table and dancing along, wanted.

It turns out that the lady is an actress and was only acting out a Comedy skit like she always does.

Her facebook page, Akhigbe E Gloria is full of such Skits and also has the concluding part of the viral video. I guess what this means is that this is her time to shine and hit the limelight.

”And I wonder how videos of movie clips I’ve featured in and the ones I am not, posted on social media by me never went viral. Pictures of awards I’ve received so far as an actress never went viral, be that I posted it or not.

“I see a video of me Slay Mama doing party clearance gone viral for the whole 24hrs and more please I just want to bring to the public notice that the video was just a fun video I did at the party, was more than one.

“On the table this video was recorded were top actresses and actors that saw me doing my thing, Aunty Keji Yusuf(sitting opposite me, bursting with laughter), Efe Orhorha(my PA on the left acting up with me Ireti Osayemi Bakare, Bakare Adeoye, Korede (whose father’s burial we were at) Bose Joseph, Delola Fadipe(owner of the hand fan I cleared) etc, if you listen well you’ll hear people laughing, the laughter was because of the video, ejo make una no pure sand fi mi Indomie o, Please I am not Omo oju o ri ola ri o, was just a fun time video.

“That video is not the only video sef and I go dey do more now as I see as so. To the person that trimmed the video, thanks you try .
Thanks to friends and family that knows me so well, I appreciate your concern.

“Here’s the part one and two.
My name is Age. …… I am an actress!”
This is the concluding part of the viral video which was cut out..