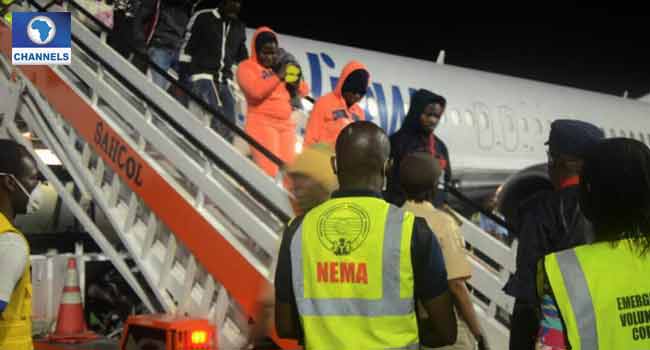 The National Emergency Management Agency (NEMA) has received another 174 Nigerians from Libya.

The returnees arrived at the Cargo Wing of the Murtala Mohammed International Airport (MMIA) onboard Al Buraq Air at 1:10 am on Friday.

While receiving them, Afolayan advised the returnees to be mindful of information about getting rich quick, especially when it involves travelling outside the country illegally.

Narrating his ordeal, one of the returnees, Chukwudi Onyemechie, 30, from Anambra, said he was a successful auto tyres dealer at Ladipo Market in Lagos before he was deceived and promised of a better life in Europe.

According to him, a man convinced him that he could help him travel to France and then linked him to his friend in Libya.

Afterwards, he (Chukwudi) sold off his wares and took off to Benin Republic from where his journey to Libya began.

He said, “I was told that that the journey would be by road but I never knew that it was a deadly and dangerous route. I entered Libya town where I was taken to a camp controlled by Nigerians where I spent three months in detention.

“My trafficker organised my detention in other that I would be forced to pay him money. He asked me to pay some amount to another man who denied that I had paid. My trafficker claimed he settled the man and I had to double the amount.

“I left Nigeria in June, 2017, I experienced unstable and dangerous life over there. After struggling to cross unsuccessfully, I was helped to get to IOM office in Libya who helped me back to Nigeria today.

“I am proud to be a Nigerian, though, we have challenges, but we are better and I am happy to be back.

“My advice to youth is that they should never think of traveling to Libya for anything, if you must travel, it is better to take regular routes and seek proper information before taking a decision.”

Another returnee, Ajasa Kikelomo who is a mother of one and hails from Ibadan, Oyo State, said she left Nigeria in 2016 with the hope of getting a better job.

Regretting her ordeal in Libya, she said, “I got to Libya with God as my savior but the racial discrimination by the Libyans are too bad.

“If you’re unfortunate to enter a bus and sit beside a Libyan, throughout the journey, the Libyan will not want your body to touch his own and he would cover his noise throughout.

“Though, some of them are very nice and good but majority, especially the youths don’t wish well for the blacks.”

According to her, she eventually got a job as a housemaid but encountered difficulties anytime she attempted to send money back home to her family.

“There is no banking system there. Nigerians who had settled down are the launderers, they have their Nigerian bank accounts.

“Once we pay them in dinars, we don’t know how they transmit the money, but our families will receive what we agreed in their bank accounts here in Nigeria.

“I am not happy for the wasted years, if I had stayed back, I could have been more settled and successful. My husband left for Dubai last year but tonight he will be coming back too.

“Nigerians should be proud of what they have and work instead of travelling outside looking for what riches that are not available outside,” she said.