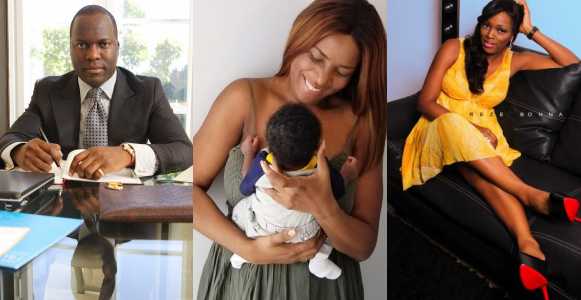 New reports say celebrity blogger, Linda Ikeji, has not been an easy ride coping with single motherhood, as her baby daddy is insisting on not having anything to do with her and her baby.

“He prefers Elohor and the two are an item. He has vowed not to have anything to do with Linda and her family. Maybe what made him more furious was the fact that Linda made her baby’s name public and used Sholaye’s name. She should have gotten approval to do that, You don’t thrust a baby at a man who has denied paternity of that baby from the outstet,” source informed Kemi Ashefon.

Currently in Italy, Elohor, who is rumoured to be pregnant, (she is a divorced mum of two) is said to be the woman Sholaye’s heart pants after.

“Elohor is more reserved, quiet in the media and exhibitno drama unlike the Ikeji family. No serious businessman will want to have anything do with either a Linda or her loud family whoselife is all on the social media for all to read,” the source said.

Since Linda was delivered of her baby Jayce Jeremi on Monday, September 17, 2018, it has been an outbreak of news on paternity and whether she had the baby naturally or through a surrogate.

A very private person, Sholaye, who is an Itsekiri guy was said to have dated Lagos socialite, Alali Hart, a beauty entrepreneur who runs Montaigne Place.

In his 40s, Sholayemi who lives in Ikoyi where Linda Ikeji also stays, is on a first name basis with quite a number of money bags such as Femi Otedola, former governor of Delta State, Emmanuel Uduaghan, Minister of State for Petroleum, Ibe Kachikwu etc.

Kemiashefonlovehaven source revealed, “He’s currently seeing a very decent lady who’s divorced and he was said to have been begged by Linda’s parents to marry Linda.

He has refused bluntly and has not picked any calls from the Ikejis. He was said to have blocked Linda from reaching him too.”