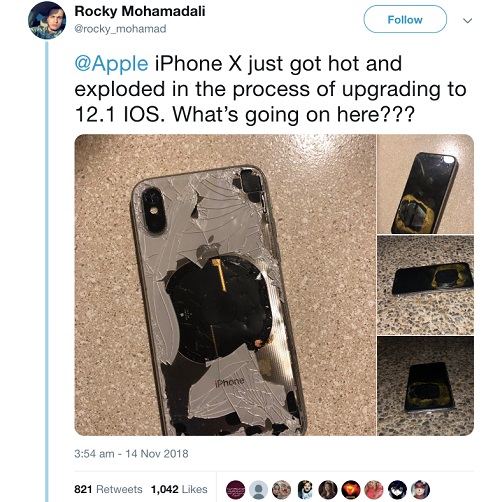 Apple is investigating reports than an iPhone X has exploded, after one user claimed on Twitter that his smartphone heated up and started giving off smoke while he was updating its software.
This wouldn’t be the first time that an iPhone X has suffered overheating problems, and in concert with Apple’s recent admission that the smartphone’s touchscreen doesn’t work properly, they question the tech giant’s usually strong reputation for producing reliable hardware.
The report of the exploding device arrived on Wednesday, when iPhone X owner Rahel Mohamad tweeted that his “iPhone X just got hot and exploded in the process of upgrading to 12.1 iOS.”
Pictures accompanying his tweet reveal a smashed and charred-looking iPhone X, while subsequent posts from Mohamad explain that the device “just started sparking off and smoking.”
In response to his tweet, Apple Support replied, “That’s definitely not expected behavior. DM us, so we can look into this with you.”
And in a follow-up tweet from yesterday, Rahel Mohamad revealed that he’d sent the phone to Apple for “further investigation,” since he wasn’t able to get appointment with one of the tech company’s stores until next week.
Mohamad’s account of what happened therefore hasn’t been confirmed yet, but it is consistent with recent iPhone X news.
Back in June, numerous iPhone X owners took to Apple support forums in order to complain that their phones were overheating to worrying levels.
One user said, “I had [my iPhone X] in my hands for a few minutes, and I could feel the case getting hot. I took the case off, and the phone was so hot I couldn’t even hold it in my hand, but it wasn’t shutting off, so I manually shut the phone off.”
Complaints from users also revealed that such heating problems came with charging issues, with some handsets struggling to keep their batteries at normal levels of power.
The report about an exploding iPhone X comes only days after Apple admitted that the touchscreens of some models don’t work properly, in that they (occasionally or completely) fail to respond to the touch of users.
“Apple has determined that some iPhone X displays may experience touch issues due to a component that might fail on the display module,” it explained earlier this week.
And while the tech giant claims that this issue affects only a “limited number” if iPhone Xs, such problems tarnish its otherwise enviable reputation for secure and trustworthy products.
What do you think about the reliability of iPhones? Let us know in the comments.
AdvertisementClick Here To Join The 10,000 Naira Giveaway For 100 People!