The Economic and Financial Crimes Commission, EFCC, on Monday, November 19, 2018, opened its case against a former governor of Ekiti State, Ayodele Fayose, who is being prosecuted for an alleged N2.2bn fraud, before Justice Mojisola Olatoregun of the Federal High Court sitting in Ikoyi, Lagos.

Fayose was arraigned alongside his company, Spotless Investment Limited, on October 22, 2018 on an 11-count charge bordering on fraud and money laundering to the tune of N2.2bn.

The former governor is facing trial in connection with N1.299bn and $5.3m out of the N4.65bn slush funds allegedly shared by the Office of the National Security Adviser, NSA, through a former Minister of State for Defence, Musiliu Obanikoro.

Fayose pleaded not guilty to the charges preferred against him and was granted bail in the sum of N50m with one surety in like sum. 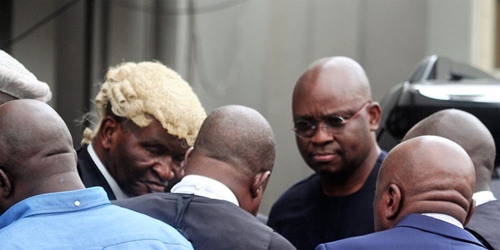 The Judge had adjourned to Monday, November 19, 2018 for the commencement of trial.

In the course of the sitting, a prosecution witness, Lawrence Akande, told the court that one Abiodun Agbele informed him sometime in June 2014 that he had about N1.2 billion cash lodgement to make in Akure,Ondo State.

Akande, an employee of Zenith Bank Plc in charge of South West comprising Ogun, Oyo and Osun States, further told the court that he subsequently received a call from the first defendant in respect of the same issue earlier discussed with him by Agbele.

“Since the lodgement was in Akure, I had to call my colleague there to follow up on it. This is all I know about it, “ he added.

When asked if he knew about the company, Spotless Investment Limited, Akande, who was led in evidence by the prosecution counsel, Rotimi Jacobs, SAN, stated that it was one of his bank’s customers at the Dugbe branch.

When he was shown the account opening document of Spotless Nigeria Limited, De Privateer Limited and Still Earth Limited as well as account document of the first defendant, the witness confirmed the documents. They were tendered and admitted in evidence as exhibita A-D by the court. 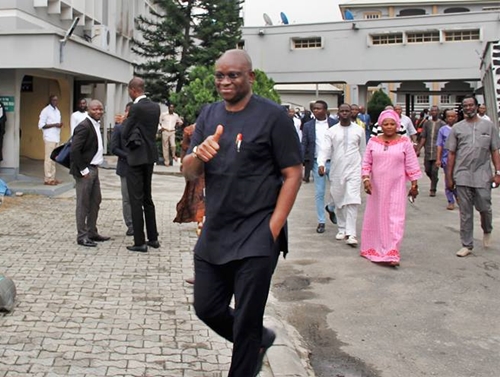 When asked where the account of the first defendant was domiciled, he said: “It is not domiciled within my domain. “But from the documents before me here, I can see Apapa”, he said.

Asked to state if the People’s Democratic Party, PDP, maintained an account with his bank, the witness said so many parties, including PDP, had accounts with his bank.

“I only mentioned him in my subsequent statements to the EFCC,” he added.

When the defence counsel told him that his evidence was based on what he was told by his colleague, whom he said handled the transactions in Akure, he responded that “I was told how the cash was processed.”

He also stated that he had sought patronage by the first defendant for opening of government account with his bank in line with his responsibility of looking for deposits.

During cross-examination by counsel to the second defendant, Olalekan Ojo, SAN, Akande confirmed to the court that a person who is not a signatory to an account cannot make withdrawals from such account. 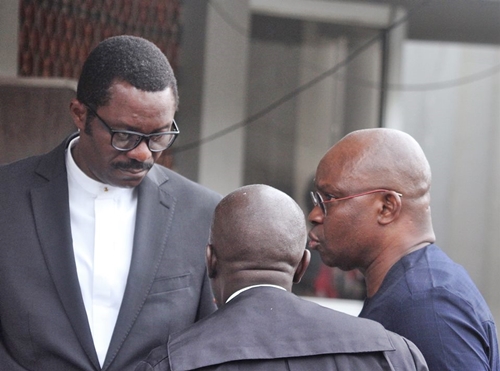 “There are withdrawal limits in every account and where withdrawals are to be made above the stipulated limits, it is reported to the Nigeria Financial Intelligence Unit (NFIU) to investigate such transaction,” he further stated.

When asked if his bank ever lodged any report of suspicious transactions on the various company accounts, he said: “We had no reason to do so.”

Also, when asked if he told the EFCC that before the account opening of De Privateer, the sum of N200 million was lodged in the account, he answered in the affirmative.

When asked if he was aware that the PDP organised a fund raiser before the election and that political parties do organise fund raising, the witness said, “It is not impossible. But I don’t know.”

Akande, who confirmed that he had not had any dealing with the account of the second defendant, also told the court that the CCTV installed in the bank usually captures customers making lodgements in the bank, except it is faulty.

A second prosecution witness, Abiodun Oshodi, who is the Zonal Head of the bank covering South West 2 comprising Ondo, Kwara and Ekiti, recalled some developments in 2014 in relation to the case, saying, “I received a call from my colleague (Akande) that Agbele would be coming to make some lodgments and that I should organise a bullion van.

“I waited for Agbele who arrived with one Sadiku and some escorts. Senator Musiliu Obanikoro, the then Minister of State for Defence, and his aide, also accompanied them. As soon as the aircraft arrived, I moved with the bullion van towards the plane to evacuate the money.

“The total sum amounted to N1.2 billion. They were lodged into accounts supplied by Agbele. Others include Spotless Nigeria Limited, De Privateer Limited as well as personal account of former governor, Fayose. Some cash were taken to Ado-Ekiti.”

The witness told the court that Agbele made the deposit on June 17.

He, however, said that from the statement before him, the depositor’s name on August 4 was given as Ayo.

A third prosecution witness, Olaitan Fajuyitan, a banker in Diamond Bank, told the court about the involvement of the bank in the transaction, saying , “We received payment instructions on June 16, 2014 to pay cash of N1.2bn. We then moved the funds to CITS account. On the same process on June 17, 2014, we paid N200 millon.”

He confirmed to court that the money was legitimate, since it was received from the Office of the National Security Adviser NSA, through the Central Bank of Nigeria, CBN.

Also, the fourth prosecution witness, PW4, Damola Otuyemo, Head, Cash in Transit in Service, Diamond Bank, said his duties involved evacuating cash from a bank that has surplus and supplying banks that do not have enough.

He said on June 16, 2014, his Director, Premier Oiwoh, informed him that they needed to pay a sum of N1.2bn cash to a customer, and that he should get the cash ready.

He said because the beneficiaries were not available to pay the cash to, he was told by his Director to move the cash to the airport.

He said: “We had to contact a company that operates bullion vans and moved the cash to the Muritala Muhammed Airport, Ikeja, Lagos .

“On getting to the Airport, we could not have access to enter. So, my Director spoke to Gbolahan Obanikoro, who was described as the person that could help us to proccess the pass. He did and we then entered. After, this Musilu Obanikoro was phoned and the cash was handed over to him. Obanikoro told me not to evacute the cash because it had to be loaded in aircraft”, he said

Giving further evidence, he said: “The whole cash was moved into the aircraft and they left the airport.

“We did not see the six beneficiaries. We released the cash to Mr Musilu Obanikoro, having been identified by my Director. It was Obanikoro who signed for the money. On June 17, 2014, my Director called me and instructed that I pay a sum of N200m to Malik Bauchi. He said we should waive identification.

“But because the amount was too much, we did not waive the identification, and the money was paid to Obanikoro. They used a cash bag called “jumbo bags” to pack N1.2bn and Ghana- must-go bags to pack N200m. The cash was handed over to Musliu Obanikoro”.

Justice Olatoregun adjourned the matter to January 21 and 28, 2019 for continuation of trial.