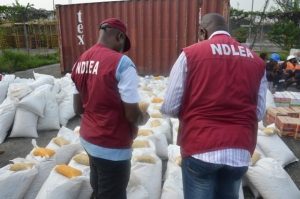 Jonah Achuma, Head of public affairs of the NDLEA, said they had gone to the Nigerian Customs Service (NCS) based on the suspicion that they had the drugs. He added that the containers had been on their watch list since November 2017.

“This brings to 581 million tramadol tablets uncovered within two days of the search. The search is still ongoing.”

Mr Achema added that there were 39 more containers that were lined up for search as the agency strongly suspected they contained illicit drugs and that the agency would not relent until the country is completely freed from Drug abuse and consumption.