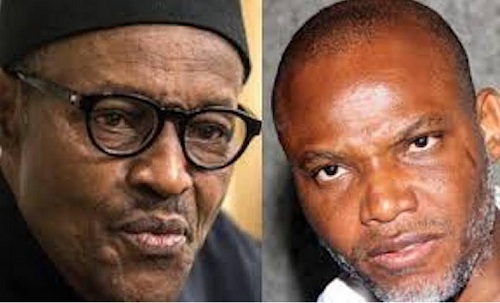 Having listened to the first radio broadcast by the leader of the Indigenous People of Biafra (IPOB) and read the transcript of the his second broadcast on November 17, certain matters arising from the said broadcasts have necessitated that I conduct this exercise. My conclusions would have been intuitively perceived by any thoughtful person interested in truth and not sensationalism or propaganda. But, a portion of the Nigerian populace has been taken and held hostage by demagogues who, to the untrained eye, appear skilled in the art of mental manipulation, but whose success in misdirecting the people is only due to the widespread ignorance, frustration, difficulty and hunger in the land.

Like President Delano Roosevelt said, “People who are hungry and out of a job are the stuff of which dictatorships are made.” Indeed, how can a hungry man who is not sure of a quality meal in a day, have the resources of time and money to carry out a thorough investigation of the facts that are being presented to him with so much force and other accoutrement of indoctrination? No, he will rather prefer to allow the demagogue to do the thinking for him, more so after he has inflicted with such a sense of inferiority for being a black man residing within the geographical space of the so called “Zoo Republic”, where nobody does any thinking.

The hungry, frustrated person will rather than look inward and confront his deficiencies and inadequacies, prefer to revel in the psychological euphoria of identifying with the pseudo-liberated “non-citizens of the Zoo Republic”, who are the only thinkers and truthful persons in the world. The analysis of the available facts presented below is in defence of truth, for as the holy writ puts it: “You shall know the truth and the truth shall set you free.”

Even though there are many factual issues in the list of 30 research findings released in the November 10 broadcast, my interest is to address two fundamental factual allegations which are conclusive in assessing the genuineness of this campaign and which can be resolved by examining available records. For those who adhere to truth and eschew sensationalism, such evidence should be sufficient to convince them and unmask the deliberate fraud being foisted on the people.

● Did Britain know that Buhari had died, as the leader of IPOB alleged?

● Did the African Union observe a minute of silence for the departed Buhari at its meeting in Addis Ababa on February 2, 2017, as alleged in the broadcast?

Did Britain Know that Buhari Had Died, As the Leader of IPOB Alleged?

In the said broadcast of November 10 (the transcript is available here), the IPOB leader proclaimed that: “Did the Queen send a condolence message to the Buhari family and Nigerians or not? Her Royal Britannic Majesty, Queen Elizabeth II sent a message of condolence to the family of Nigeria’s President Muhammadu Buhari and the people of Nigeria. THIS WAS WIDELY REPORTED AT THE TIME…” And he went further: “Why did Queen Elizabeth write a condolence letter if Buhari wasn’t dead? … In a message of condolence, the Queen described Buhari as “one of Africa’s pillars”. She wrote: “The death of President Buhari came to us as a shock. He has been one of the active pillars in Africa. May the good people of Nigeria and Africa know that our hearts are with them in these hard times.”

1. The first published post about the president’s death was on January 21, 2017 from a blogger who goes by the name, MRrational Laughter, and whose blog claims to be the ‘No. 1 Port Harcourt City Blog.’ According to the blog, “Nigerian President Muhammadu Buhari has died in a London Hospital where he was receiving medical care, the NIGERIAN MISSION IN UK has confirmed. According to the INFORMATION RELEASED BY THE NIGERIAN EMBASSY, Buhari left the West African country for a vacation in the U.K in order to undergo medical checks. The office of the President is yet to issue an official statement on the president’s demise…” Again, on January 29, the blog republished the article under the headline “LATEST BREAKING NEWS: Nigeria’s President Muhammadu Buhari Is Dead Confirmed By CNN-ALIVE.”

The first thing that should surprise anyone about this blog post is the fact that with all the international protocols surrounding presidents, the Nigerian president could die in a hospital in London, and it was only one lonely Port Harcourt blogger who got confirmation of the said death by the NIGERIAN MISSION IN UK and also got the INFORMATION RELEASED BY THE NIGERIAN EMBASSY about the death. None of the international media knew about this confirmation or information!

There are no official reports on the speculated death of the President and the message of condolence from the British Monarchy has put Nigerians in state of despair. Two sources close to the Presidency have said the President has passed on and that the photos circulating online are those from his previous visit…” The portion of the foregoing blog post underlined is to show the inconsistency between the earlier post alleging that the NIGERIAN MISSION IN UK has confirmed the news of the death of the president (which has suddenly become speculated and no longer confirmed), and the later post.

3. By January 30, a few other blog sites had picked up the news and tried to give it some traction and online presence. Some of the blogs have already been taken down and some of the accounts have been suspended. But, example of such blogs are listed below:

a. http://www.naijanewsplus.com/breaking-news-nigerias-president-muhammadu-buhari-is-dead-confirmed-by-cnn-alive/ published on January 30, 2017;

d. http://www.omonaijablog.com/2017/02/buhari-dead-queen-elizabeth-ii.html of February 3, 2017, which cited its source as vanguardngr.local-reports.com;

m. https://www.naijanews.com/2017/02/07/fact-check-queen-elizabeth-send-condolence-message-buharis-death/ Note that this was an attempt by this blog site to rebut the news

4. There is a further point of interest concerning the republished post about the Queen’s condolence message by currentnewsnow.com, which is listed as (b) above. The picture of Queen Elizabeth II signing a condolence register used in that post is a creative image from Chatham House used by royalcentral.co.uk on October 15, 2016 in relation to the death of King Bhumibol of Thailand.

5. There are numerous reported examples of the Queen sending condolence messages to presidents and heads of government when sad events occur and such instances are widely reported by the British and international media and they are not hidden affairs left to the reporting of bloggers. There are many examples online, but it is important to note that the British Royal Family maintains a website on with there are many examples of such reports.

6. Before we conclude on this first issue, even though no reference was made to this fact in either of the two broadcasts, we might as well address it immediately, as it relates to the sponsored campaign to make people believe the president is dead. This endeavour has also been used to bamboozle ignorant listeners. I am referring to the tweet campaign of Eric Joyce, a former UK politician and soldier, on May 19, 2017, whereby he tried to convince Nigerians that the president died in London in the early hours of May 19, 2017.

A screenshot of his tweets and various responses to the issue are available on Twitter. My interest here also is in the duplicity that was displayed by the former politician, who had categorically claimed (without providing any proof) in his tweet on May 19th that: “The president of one of the world’s largest and most sensitive countries DIED IN LONDON TODAY. In our main news bulletin, not a word #Buhari”, only for him to turn around on his website’s posts to claim that it was the duty of the Nigerian Presidency to prove that the president was alive. He also played the race/ethnic card, which is guaranteed to upset any insecure black person, by saying that the British Press is full of white people who claim to be knowledgeable about the incident.

We refer to this incident to show that there are two incidents touted by proponents of this theory fixing the president’s death in January 2017 and also on May 19, 2017. Both cannot be true, as being made out by the spinners of this tale.

Conclusion On Issue One

We have purposely left out of this analysis, issues of existing international protocols about such things as the passing on of the president of a country or the sheer illogicality of the idea that all the people who knew of the president’s health status or who worked in the purported London Hospital where he was being treated etc. could all have been bought over or threatened into keeping quiet about the president’s demise. I have simply restricted myself to showing, by available evidence, that contrary to the standard and natural course of events, the purported death of the president, which allegedly took place in London, was reported only by a lonely blogger in Port Harcourt, who mysteriously was able to obtain confirmation and information from the NIGERIAN MISSION IN UK and the Nigerian Embassy in UK, about the death, but later repudiated the said confirmation. It was also the same blogger who received mysterious information about Queen Elizabeth’s condolence message and published the same without the Royal Family or any other international media knowing about this message. The bloggers who republished news of the condolence message even went to the extent of using a past picture of the Queen sending a condolence message to another sovereign to buttress their false story. It reeks of fraud and criminal intent, but more of that later.

In conclusion, to this part, the trend already established by this first part of our analysis, of using bloggers to spread propaganda and falsehood should be an eye opener. But, we will leave that commentary on the legal and national security implications of this for now. I think that the IPOB “leader” who condescendingly has the temerity to say about the African race that “We Africans are stupid beyond stupidity” or that “Our collective stupidity as black Africans didn’t start with the visit of Prince Charles”, in cooking up this puerile plot, obviously thinks that the brains of his followers operate on “Tiger” batteries. (pardon the pun).

Nonso Robert Attoh is a law lecturer in the Faculty of Law, University of Nigeria, Enugu Campus.