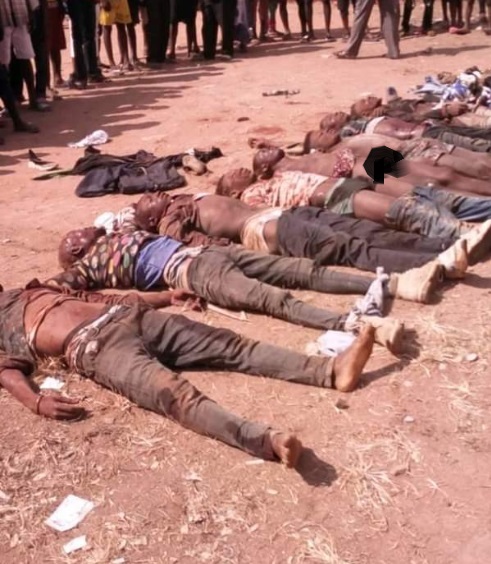 At least, 13 suspected members of a cult group, were Saturday night, reportedly hacked to death during a major fracas with youths of Lessel community in Ushongo Local Government Area of Benue State.

It was gathered that the clash, which lasted over two hours, also left several persons with serious injuries.

An eyewitness told newsmen that the crisis started when members of a cult, who were in the town for a meeting, attacked and killed a commercial motorbike operator, whose motorbike they had attempted to snatch.

According to the eyewitness, “The group had come to Lessel town in their numbers on Saturday night for what we gathered was their annual convention.

“They ran into the okadaman, who they engaged to convey some of them to a guest house in Lessel, venue of the meeting where some of them also put up.

“On completing the assignment of conveying them to their destination, the cult members demanded the key of the motorbike, but the rider refused to surrender his bike to them.

“They descended on him and killed him instantly. But the news of the murder filtered into town and the youths in Lessel mobilised and stormed the guest house with dangerous weapons.

“A bloody fight ensued, some of the cult members were hacked to death, while others captured alive led the youths to where other members of the cult were hiding.

“They were all rounded up by the youths. It took the intervention of the Police, who stormed the area, to stop the killing of more cultists, most of whom had been beaten to a pulp by the youths.”

Reacting, Benue State Police Commissioner, Mr. Ene Okoh, said: “When we got the information, my men moved in quickly and arrested 13 persons, who were involved in the fracas, but I can confirm that nine persons were killed in the clash.”