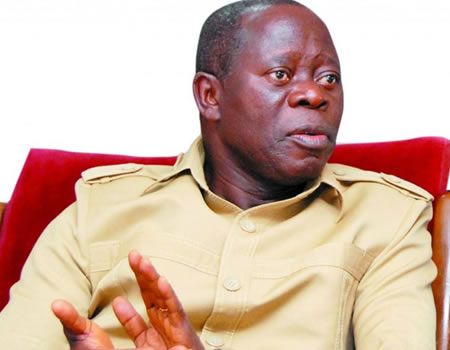 National Chairman of the All Progressives Congress (APC) Comrade Adams Oshiomhole has said that Nigerian government can afford living wage for workers, if stealing of public money is curbed, a report by The Nation has revealed.

He said non-payment of salaries by governors creates a vicious circle leading to low production and eventual loss of jobs.

Oshiomhole, a former trade union leader, said as a governor, he told his colleagues that payment of salaries was no burden, but a means of enhancing the development potential of the state.

He said that the country’s major problem is stealing of public resources.

His position is in clear contrast with that of state governors, who claimed they could not pay a national minimum wage of N30,000 being proposed, unless they downsized the staff force.

As a governor, Oshiomhole paid Edo workers a minimum of N25,000, which was N7,000 above the national minimum.

“My views are clear, that payment of wages is not an act of kindness for an employer to pay the employees’ wages at the end of the month. Even the Holy Bible says that the labourer is entitled to its wages”, Oshiomhole said.

“I think, again, this is where President Buhari stands out clearly. He has publicly asked public sector employers; how do you sleep when you have not paid your employers for one year. But he did not stop at lamenting it, he went on to provide the much- talked about bailout fund and said, ‘please use this money to pay your workers and pay pension arrears.

“And even the deductions from states that was done under the PDP in the name of settling our foreign debts, they went into state treasury and they over deducted; that was done under the PDP. But under President Muhammadu Buhari’s government, even in spite of the huge financial challenges that he faces, decided that in order to assist the states to meet up with their social obligations, to begin to pay what is now referred to as Paris Club refund.

“He has done that two, three instalments and each time the governors are told that you must use this money, among other things to settle pension arrears and be up to date in the payment of salaries.

“But I am very proud that this President has rich conscience, he recognises that the Nigerian worker deserves his wages and that is why he has publicly lamented that there are governors who have not paid salaries as at when due, whether they are PDP or APC, it is immaterial. And in seeking to deal with it he has also provided support across party divide and I think that is statesmanship at its best.

“As for my views on the minimum wage, I tried to deal with it as a governor. I told my colleagues then that wage is not a burden in the society. In economics, when people work and get paid, purchasing power is enhanced and because purchasing power is enhanced producers will respond to that by seeking to produce more goods and services. And in the process they will recruit more hands.

“My being in government or now chairman of a party cannot change what I believe in.

“The real problem in the public sector is money being stolen in the name of salaries, I find it embarrassing when we talk about ghost workers. And I ask the question, who counts ghosts. It is only in Nigeria that ghosts are known.”