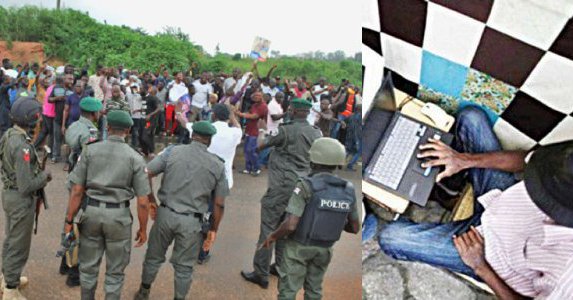 Men of the Delta State Police Command Asaba have arrested three “Yahoo Boys” following a failed attempt on Monday to use their girlfriends for money rituals.

Daily Post reports that the suspected ritualists who live within Ifant Jesus area in Asaba had on Monday attempted to Use their girlfriends for alleged money rituals when the bubble burst after their failed move in the early hours.

The Commissioner of police in the state, Mustafa Muhammad, who confirmed the arrest of the suspects on Saturday in Asaba, said “they have been going out with the girls.

“They lavish money on them until the fateful Monday when they gave them water in pots to drink, one of them refused and immediately called her brother at the State CID and described the house to them, and the police mobilized to the house and arrested them in an apartment around Ifant Jesus area of Asaba”

He added that the suspects having made useful statements to the police, were being detained for further investigation as they will be charged to court on completion of investigation.

CP Muhammad disclosed that the police were working hard with a view to arresting other Yahoo boys in the state.

“The police will leave no stone unturned to ensure that all the Yahoo boys are brought to book, the police have enough reports on the Yahoo boys and we are closing in on them, very soon it will be history in the state,” he added.

It was further gathered that the state had in the recent times been invaded by Yahoo Yahoo Boys, especially in major cities like Asaba, Warri, Ughelli, Ibusa, Okpanam and Kwale towns.

One of the girls, who spoke to journalists in Asaba on Condition of anonymity said “I have been dating one of the suspects for three years now before the bubble burst.