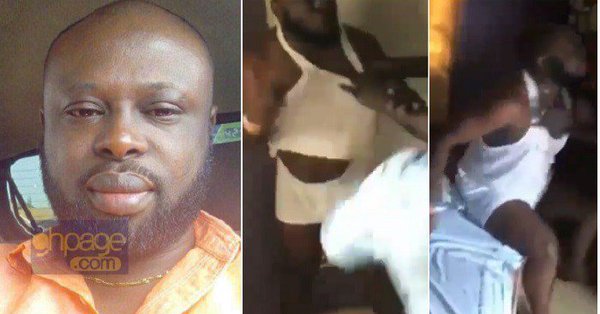 A Junior Pastor at Prophet Emmanuel Badu Kobi’s Glorious Wave Chapel International in Ghana, Pastor Nana Appiah had only his white singlet and white pair of boxer shorts on when he was caught in the act by the married woman’s sister.

The popular Ghanaian Pastor who is also known as someone who often criticises government over a proposed taxing of churches, reportedly got angry and struck the young lady’s sister in the face after she caught them in the act.

The lady however started screaming after she was struck and some guys in the area heard and came to her rescue.

It was gathered that Appiah who could be heard saying that he was innocent and that the lady had plotted with others to get him killed in the viral video, was beaten mercilessly by thugs in the area after they realized that he is a Pastor.

#viralvideo of 2 men attacking a Pastor caught sleeping with the wife of one of them, in Ghana.