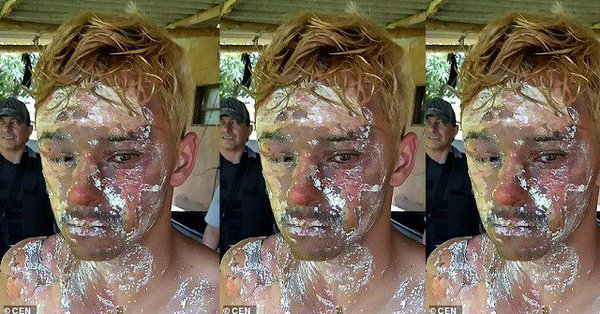 A pregnant woman violently attacked her ex-husband by throwing boiling water on him after he allegedly kidnapped and raped her in the southern Brazilian state of Mato Grosso do Sul.

The 20-year-old woman who is yet to be named accused her former partner, also 20, of kidnapping her in a car with the help of her brother and another woman.

The ex-husband reportedly kept her captive, tortured her and repeatedly raped her, but she was able to fight him off by throwing boiling water on him.

Mail Online reported that the woman, who is four months pregnant, had been reported missing before police found her the following day in a house where she was allegedly being kept as a prisoner.

According to Brazilian authorities, the suspect confessed to having carried out the crimes and said the victim took advantage of a moment of carelessness to throw boiling water over him.

Images taken by police in the town of Eldorado shows the suspect face, neck, and upper chest seriously burnt in the counter-attack.