Galadima was unveiled at an event Wednesday in Ilorin, during which Ezekwesili also launched the party’s manifesto.

He was the chairman of the party and had vied for the top post along with Ezekwesili.

Galadima, a community leader and former ACPN presidential candidate, was born on June 11,1964.

He studied Public Administration at the Kwara State Polytechnic, where he also later served as member of the institution’s Governing Council.

“He is a businessman who is chairman of major business boards.

“He has private sector and corporate governance experience with a market-focused enterprise, friendly government vision,” the statement said.

The presidential candidate said the selection of Galadima, a businessman, would bring to the ACPN ticket an experience at grassroots politics at the local, state and national levels. 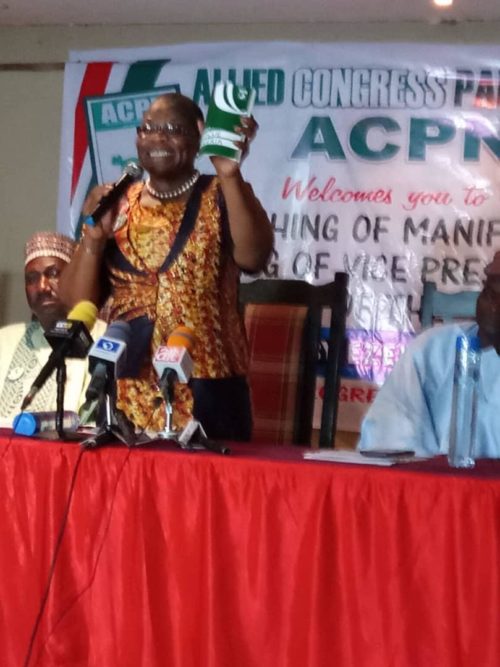 She described her running mate as a man of integrity, saying his principles and selfless politics aligned with hers and her vision for the country.

“This experience complements my incomparable competence and capacity when it comes to socio-economic and governance issues.

“Like me, Alhaji Galadima has shown a long-standing commitment to the fight to rescue our nation by standing with people of integrity.

“He refused to join questionable alliances and coalitions led and bankrolled by ruling parties in this election and in that of 2015, where he ultimately emerged as the fourth most popular candidate across the nation.

“Together, by the grace of God, we will work closely, selflessly and as a team to fight for every Nigerian person, family, community, ward or state, and rescue our country from the clutches of an irresponsible political class.

“Together we will lift 80+ million Nigerians out of poverty and unlock prosperity for every citizen,” she said.

Galadima assured Ezekwesili of his loyalty and promised to work with her towards getting people’s mandate in the 2019 general elections.