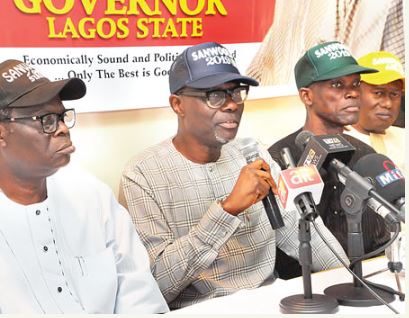 The adjustment, the Guild gathered, was embarked upon to ensure that candidates of other political parties vying for the seat were kept on their toes till after the election. Besides, the campaign team also adopted Independent Campaign Group (ICG) platform to run an inclusive campaign house that would accommodate aggrieved members and form a joint front ahead of 2019 election.

Under the new structure, 43 members of the party were appointed based on their expertise as directors and coordinators who were to serve across the three senatorial districts in the state.

After the adjustment, Tayo Ayinde was appointed as Director-General of Babajide Olusola Sanwo-Olu Independent Campaign Group (BOSICG), haven previously served in same position before the merger of Ambode and Sanwo-Olu campaign teams.

At the inauguration yesterday, Ayinde announced the names of directors of the each created directorates, with various tasks tied to the entire positions.

On the list, Lagos State Peoples Democratic Party (PDP) former chairman, Moshood Salvador, was announced as Assistant Director-General who would oversee the group’s affairs in West Senatorial district of the state; with responsibility of coordinating President Muhammadu Buhari’s campaign in Lagos.

Also on the director list were Eshinlokun-Sanni, who was appointed to oversea Research and Intelligence, Commissioner for Home Affairs and Culture, Abdul-Lateef, was assigned for Conflict Resolution while Lagos State former Solicitor-General, Lawal Pedro, was made to handle the group’s legal affairs.

As Sanwo-Olu announced his appointment, a source from APC secretariat, disclosed that the party had created nine directorates that would handle 2019 election campaign for the party in the state.

The source said that, though, the party was making efforts to compel Sanwo-Olu’s ICG to collapse 41 directorate structures to nine, but that may not be achievable since the independent campaign group’s aim was to harmonize all aggrieved party members after the recently conducted primary election.

He hinted that the party had invited Ayinde and Odunbaku on the aforementioned but met stiff resistance of directors who were earlier privy to APC plan.

According to him, the party may have no option than to stay away from the group’s structure and accept Sanwo-Olu’s campaign plan. Meanwhile, as part of the strategy to reach rural dwellers, an arm of Sanwo-Olu’s ICG was also established to engage citizens at grassroots level across the state.

The arm, ICG Grassroots Engagement Committee, as part of its responsibility is saddled with the responsibility of coordinating street canvassers and artisans within the state.