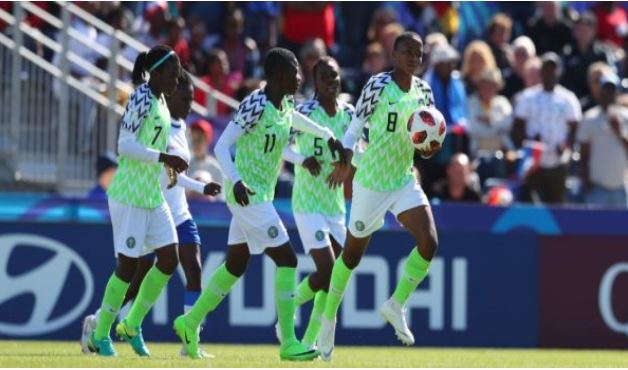 The Super Falcons of Nigeria yesterday maintained their dominance over the Indomitable Lionesses of Cameroon as they defeated their perennial rivals 4-2 on penalties to reach the finals at the ongoing 2019 Africa Women’s Cup of Nations in Ghana.

The match which was rightly tagged final before finals lived up to expectations as both heavy weights fought hard to pick the ticket to the grand finale on Saturday.

The Indomitable Lionesses of Cameroon who had suffered back-to-back final losses against the Super Falcons  in 2014 and 2016 saw yesterday match as an opportunity to take back their own pound of flesh.

It is also on record that apart from the two losses in the AWCON finals, the Cameroon ladies have lost 11 out of 12 times they faced the Super Falcons.

At the blast of the whistle yesterday, the Lionesses took total control of the game in order to show their intent at stopping the Falcons in their tracks.

After absorbing the Lionesses’ pressure, the Falcons also pushed forward but their incursions yielded no positive results.

The second half of the explosive encounter also failed to separate the two giants as the match ended 0-0 after regulation and extra-time.

In the resultant penalty shoot-out, Onome Ebi, Rasheedat Ajibade and Asisat Oshoala scored from the spot as Rivers Angels goalkeeper, Tochukwu Oluehi denied Cameroon from scoring two of their kicks.

Ngozi Ebere then fired in the last penalty that landed the Falcons in the 2019 AWCON finals.

With yesterday’s victory, the defending champions have become the first African nation to qualify for 2019 Women’s World Cup in France.

They also extended their historic streak of qualifying for every FIFA Women’s World Cup since the maiden edition in 1991.